I came across a journal kept by George Catlin, an explorer and painter traveling the American West in the 1830s, in which he documents a yearly Mandan ceremony commemorating a great flood, in the American Indian Histories and Cultures database. While Catlin describes the ceremony as a dance and documents the role of singing and drumming in the ritual, he spends far more time describing the elaborate costumes of the dancers and the story they are telling than he does describing the music itself.

This is typical of a wider attitude which prevailed among ethnomusicologists, historians, and the public until fairly recently that Native American musical traditions were little more than primitive chants and drum beats and were certainly not artifacts of high culture like the European musical canon.1 This attitude meant that Native music was often not taken seriously by early observers like Sir Francis Drake and John Smith, whose descriptions of “a most miserable and doleful manner of shreeking [sic]” and “such a terrible noise as would rather affright” the listener echo those of Catlin.2 Even the work of later authors like Frances Densmore and Alice Fletcher, who pioneered serious ethnomusicological investigation of Native traditions, often relied on theories of social evolution to justify the idea that Native Americans and their music could not possibly be as advanced as European culture and music.4

Catlin’s focus on the story being told seems more appropriate to a play or pantomime rather than a musical performance. He does not analyze the music itself beyond a few short comments, but describes at length the elaborate costumes of the dancers and the many animals and natural phenomena they represent, noting that “many curious and grotesque amusements and ceremonies” took place over the four days of the ceremony.3 Besides devoting several pages of text to describing the ceremony, Catlin also preserved it in several paintings. 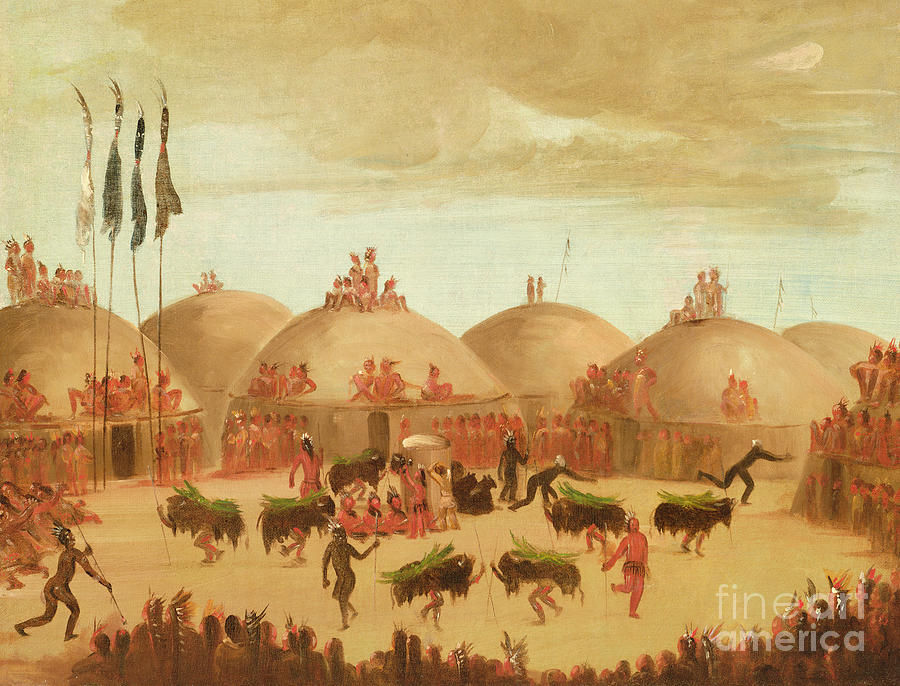 Catlin mentions that large water-filled sacks were used as drums, along with rattles, to accompany a song which is repeated many times throughout the ritual, and notes that it was impossible to obtain a translation of this song, as it was a closely guarded secret even within the tribe. However, beyond these observations he makes no attempt to analyze the lyrics, composition, or instrumentation of the song, focusing instead on the visual spectacle of the bull-dance, which he describes as being “of an exceedingly grotesque and amusing character”.3

As an explorer who was clearly dedicated to documenting the rituals he saw both on the page and the canvas, it is fair to assume that Catlin was truly interested in preserving the details of the ceremony he was witnessing. Of course, Catlin was far from a trained ethnomusicologist, as the field didn’t even exist for fifty years after he was writing, and therefore did not have the same goals or values and was probably not musically trained. However, this amateur status actually reveals that Catlin’s attitude that the ceremony was simply too far outside of his experience to count as music and was not worth preserving or even really discussing was a common reaction to Native music. While these cultural attitudes clearly had nothing to do with formal training or education, they were still taken as scientific truth for decades.

4 Browner, Tara. “All about Theory, Method, and Pow-Wows.” Essay. In Heartbeat of the People: Music and Dance of the Northern Pow-Wow, 1–17. Urbana, Illinois: University of Illinois Press, 2004.