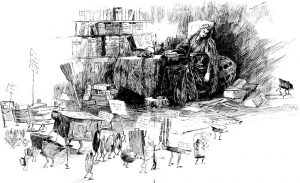 The concept of “nurture versus nature” is a scientific and ideological question that haunts every single academic field. Not even the immortal and ever changing world of music can escape. In her 2017 IBMA Keynote address bluegrass musician Rhiannon Giddens notes that the intersection between her biracial identity and love for bluegrass music are just an examples of why it is so important to “celebrate the greater diversity of the people who have shaped the music that is so much a part of [her] identity”. 1 There is a generational thread that exists within bluegrass music that is not simply resigned to Rhiannon Giddens’ story. The Lomax family, a similarly generational act, documented families all across the American South during the late 1930’s, some who are participating in the musical traditions associated with folk and bluegrass music. 2 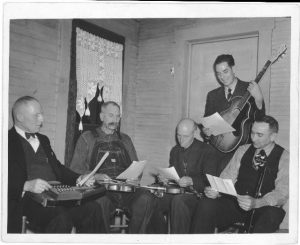 Music is so often attached to particular aspects of identity, it goes beyond family and represents tradition within an entire line of people. One aspect of the folk musical tradition is the way in which it can, and has, reinforced gender and age roles within a tradition. In many songs there may be particular parts mapped out for different vocal ranges, allowing for mother, father, and children to talk their place within the musical tradition. 3 A slightly more contemporary example that S.W. Mills uses in Bringing the family tradition in bluegrass music to the music classroom, is Johnny Cash’s “Daddy Sang Bass”.

The idea of this broad category of music bringing people together didn’t exist just in communities of white Americans.The racial makeup of these traditions is something explored both by Giddens in her keynote address as well as the Lomax family. Their documentation spanned the gamut, showing musicians in each tradition. 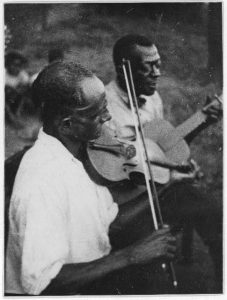 One thing that connects these two racially divided traditions is the generational role of music, especially folk music. It shows its importance not only in the formation of modern folk music but also its role in the formation of family values. Though documentation (and misuse) is a relatively controversial topic the ability to study such things wouldn’t exist without the resources provided from people like the Lomax family. Ultimately, it’s important to acknowledge the beautiful and meaningful way music brings people together.