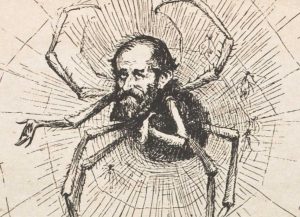 “Spider” John Koerner, a prominent blues musician, was born in Rochester, New York in 1938. He grew up in New York, and eventually found himself studying for an engineering major at the University of Minnesota. This was short lived because it was there that he met the legendary Dave “Shaker” Ray.1

Koerner’s blues career was basically jumpstarted through this encounter. The two musicians jammed together often and formed a steadfast friendship. Koerner even wrote his most famous hit, “Good Time Charlie’s Back in Town Again,” after Ray stopped in to visit him once.

While visiting Ray in New York, Koerner also met harp player Tony Glover. The three of them formed what was arguably the most well known, yet unofficial, folk trios of the 1930s2. They played many gigs together, always providing a great time for their audiences as well as themselves.

Dave and Tony were kind of livin’ in Minneapolis cause that was home to them and they had things holdin’ ’em there. I had the chance to travel and I could get the work so I started travelin’ around. Then we’d just meet whenever we were in the same town together and play jobs whenever anybody was willin’ to put us together.3 ~Koerner

Their performances were well known to be enjoyable for both the audience and the performers. Koerner always made it a good time for everybody, and it was well appreciated by all those who saw and knew him. One of the last times the group got together was a prime example of this.

It was kind of weird. We played the Tyrone Guthrie Theater in Minneapolis. We played one night opposite the Who. We were very drunk and fairly well stoned and we had practiced together just a couple of hours. It was kind of shakey but we had a good time.4 ~Koerner

In his solo performances, Ray’s influence in his life could also be seen clearly. When he performed at the Quiet Knight in December 1968, he was introduced as having been influenced by Ray from a young age.5 He grew up listening to him from a young age, and this transitioned into his own playing. Another time, when he returned to perform at the Gaslight, his audience “remembered” and requested that he play “Good Time Charlie’s Back in Town Again” which he wrote for Ray. When describing his performance, Koerner said…

Tony Glover calls it the oatmeal shake, cause it looked like you dipped your hand in a bucket of oatmeal and tryin’ to get it off by shakin’ your hand6 around. ~Koerner

Koerner was an amazing performer who had both talent as well as a charismatic and fun presence. He was greatly influenced by Dave Ray, as well as Tony Glover. Ray’s influence especially could be seen throughout his entire life, and it goes to show you how a simple chance encounter can truly go a long way. Koerner never expected success to find him when he was planning on becoming an engineer, but it did just that.