On July 23, 1936, William Grant Still made his debut in Los Angeles conducting at the Hollywood Bowl. The article I found on this, written by Lawrence LaMar, describes how “an outstanding history making triumph as been achieved.” This performance was only a couple of years after Still won the Guggenheim Fellowship award for “Land of Romance” and “Afro-Symphony Orchestra.” Our class has been looking at the impacts of black nationalism within “American” music and how it has shaped today’s music. This discussion couldn’t be held without William Grant Still and his “Afro-American Symphony.” Even during the 1930’s, the public knew of its impact and what was taking shape, and how it could change history in music. Out of the 20,000 seats at the Hollywood Bowl, 12,000 of them were filled. This sounded like an average amount of attenders based off how the author was describing it. However,

“about 250 of the 12,000 people assembled in the Hollywood Bowl that seats 20,000 were of the Race. This number, although small in comparison to the whole, represents an increase over past regular season bowl attendance of Negroes.”

It is interesting to read how 250 might not have been a large number of people “in comparison to the whole” but that it shows that persons of color are increasing in numbers for attending the bowl.
This article views William Grant Still and thus his pieces as valuably important for American and American music. The writer states, “Each of the gripping symphonies that conveyed the feeling of the Race American toward the land of his folklore was marvelously rendered by the great orchestra that responded readily under the left guidance of its first Race conductor.” I found that this article showed some of the feelings that the BIPOC community was feeling towards Still and his compositions. The article can be used to shed light on this aspect as well as the ideas of how that ties into the impact on American music. 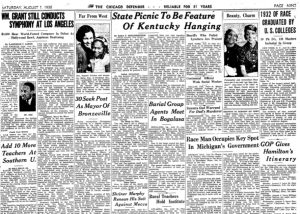 Another interesting aspect of this article is the literal, physical context around it. Surrounding this column in the Chicago Defender are many more negative articles about “members of race.” Titles such as “State Picnic To Be Feature Of Kentucky Hanging” stand out instantly to the viewer upon opening this paper. The article on Still is captivatingly uplifting and hopeful right next to the article that paints such a horrific image for the BIPOC community.
Another aspect of the context around the article on Still is the emphasis on music that this community holds. Simply turning the page of this newspaper brings you to BOLD headlines you can view in the following photos. 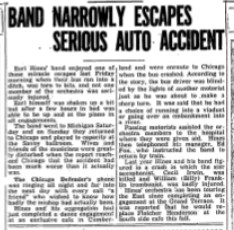 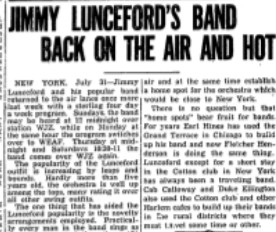 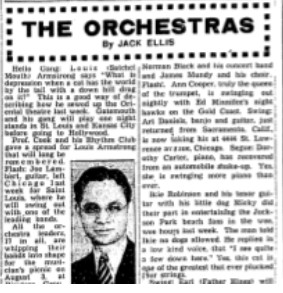