In searching the Chicago defender, I was curious to find any information about Frances Densmore’s colleagues. In my previous blog post, I researched James Mooney, an ethnographer of the 19th century, but I wanted to search for other scholars who worked directly with Densmore. Additionally, I was interested in what kinds of projects Densmore was involved in other than Indigenous song collection.

I found a newspaper clipping from 1937 that gives insight into Densmore’s career while giving the names of her colleagues at the time. The clipping announced the staging of the first National Folk Festival to be held in the north for May 22nd through May 28th, 1937. The National Folk Festival is a folk festival that has been run by The National Council for the Traditional Arts since 1934, with the first performance held in St. Louis, Missouri. It celebrates multi-cultural performances, and many prominent musicians, such as W.C. Handy have performed at the festival. The newspaper clipping outlines its purpose as the following:

The objective of the festival has been summed up as: “to bring together in a colorful, joy-giving National Folk festival the native and traditional Folk arts which, for centuries, have refreshed the hearts of the American people in the various sections of our land.”

Listen to a recording of the Metropolitan Community Church Choir perform “Fare Ye Well” at the festival in 1937: https://www.loc.gov/item/ihas.200196400/?

Below is a photo of an Irish group from Chicago rehearsing for the 1944 Folk Festival. 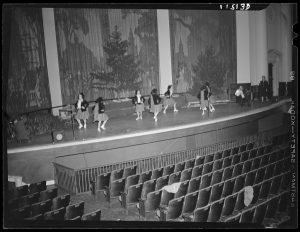 The article lists Densmore as one of the sixty members of the national committee, along with another familiar name that Music345 has engaged with, George Pullen Jackson. Jackson was an American musicologist who studied hymnody, and as the class remembers from our past discussions, had racist opinions of the origins of spirituals. Although it is unclear based on this article alone how much contact Jackson and Densmore had, they did end up on this same committee. Did they exchange ideas and influence each other? What were their motivations to be on the committee? This newspaper article reminds researchers of the importance of investigating the motivations of scholars and considering the overlap in ideas.

“National Folk Festival to be Staged in the North for First Time, may 22: People from all Over U. S. Will Come to Orchestra Hall with Songs of their Communities.” 1937.The Chicago Defender (National Edition) (1921-1967), May 22, 3. https://www.proquest.com/historical-newspapers/national-folk-festival-be-staged-north-first-time/docview/492484882/se-2?accountid=351.

Jackson, George Pullen. White and Negro Spirituals : Their Life Span and Kinship, Tracing 200 Years of Untrammeled Song Making and Singing Among Our Country Folk, with 116 Songs as Sung by Both Races New York: J. J. Augustin, 1944.