Duke Ellington, or Edward Ellington, was born in 1899 in Washington D.C. and began playing the piano at the age of six. He then began his career as a professional musician at the age of seventeen. He played piano, led his jazz orchestra, and composed the music they performed. In his time and ours, Ellington has been regarded as one of the greatest composers in the U.S. and also a vital figure in the success of Jazz as a genre1 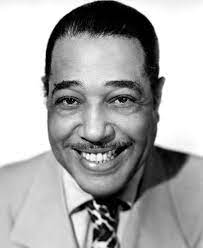 Ellington was wildly successful and won twelve Grammy Awards, nine of which were when he was alive. He also performed globally in places like Carnegie Hall and was even awarded the Medal of Freedom by President Richard Nixon1,2,3. All of this is made more difficult and therefore more impressive because of his disadvantage as a black man in the United States, especially before the civil rights movement.

What I also think is interesting, is that not only do we see Duke Ellington now as crucial to the development of modern music, but he was also recognized as such during his own time. The Chicago Defender, a black newspaper, published an article entitled “Duke Ellington to Lead Billikens”. This article was about a parade Ellington lead that attracted over half a million people. At the end of the article is a page listing Ellington’s successes and in it, the author states, “He is regarded as a creator of a new, rich, and distinctly American musical idiom”. They go on to say, Ellington “has contributed more to modern music in originality, melodic material, and arrangement technique than any other contemporary”. Historically, I would argue the rarity of an artist being appreciated for their contributions to the art form in their own time. Therefore, to have this level of accreditation attached to his name speaks volumes for his talent. 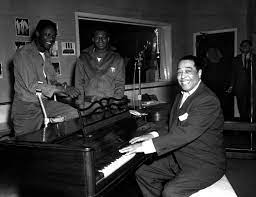 However, of course, this newspaper was published by black writers and written for a black audience, however, the Grammys he won as well as the crowds he attracted are definitely noteworthy and point towards the recognition of Ellington’s talents and contributions to music during his time. While the majority of his success was probably due to his talent and musical upbringing, I can’ help but wonder how he managed to make music and succeed with the racial climate of the fifties in the United States. I think part of it could be due to the fact he was part of the larger movement of the Harlem Renaissance, and partly due to his geographical position in New York. While I do not have these answers yet, I would be interested to read more about his experience as a composer and performer during this time period. Perhaps this is a future blog post?

I included below a performance of Duke Ellington.