Ah yes, here we are, once more. Welcome back to Cohen Quest, the award-winning blogging series. Cecil Cohen, as we have well seen, was a highly accomplished pianist and composer. He occupies a very unique position as someone deeply entangled with the music making of black musicians in the 1910s through the 1960s, but has stayed quite under the radar in terms of historical provenance. Again, I seem to be the only person in the world who has tried to uncover who this guy was. One of the most fascinating examples of this liminal space Cohen enjoyed was as a featured composer in a recital given by Todd Duncan on March 8, 1944, at The Town Hall in New York.1 Duncan and Cohen were colleagues at Howard University: Cohen had been an Associate Professor of Music for two decades now, and Duncan joined the faculty in 1930.2, 3

Although not mentioned in the New York Times article, Duncan performed a piece by Cohen at the end of the recital titled “As at Thy Portals also Death.”4 As far as I can tell this piece was never published and may not have had much performance beyond Todd Duncan’s recitals in 1944. Nora Holt, noted composer and music critic, said this about Cohen’s piece:

“[As at Thy Portals also Death] is composed in a tragic vein with arpeggio accompaniment and was rendered with great feeling by Mr. Duncan.” 5

Through sheer willpower and some emailing, I have been granted access to the world’s entire collection of Cecil Cohen manuscript scores (about six unique scores in total), one of which being “As at Thy Portals also Death.” The piece itself is a lovely, if at 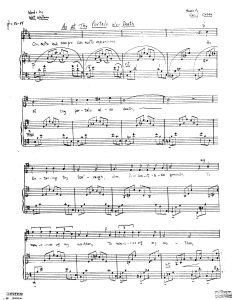 times, odd, synthesis of a Walt Whitman poem about the death of his mother; I have yet to confirm it, but I believe Cohen may have written this after the death of his own mother, Flora. It certainly feels plausible: the phrase “to her, buried and gone, yet buried not, gone not from me” is set as recitative over strong and dissonant block chords. The sudden change from the preceding ostinato is jarring and feels like an outburst of grief.

“As at Thy Portals,” like most of Cohen’s songs, is intentionally dissonant, referencing the musical language of jazz; one would be hard-pressed to perform a proper Roman Numeral analysis on it. He tended to avoid Beethoven and Bach on his programs, favoring Debussy and Faure; you can see the French influence in each of his songs, and “As at Thy Portals” is no exception.6 Not many African-American classical composers were incorporating into their music the stylings and harmonies of jazz, a profoundly African-American art form; it is not so surprising then that Cohen enjoyed French Impressionism so much. Todd Duncan likely performed this piece multiple times, once even with Cohen at the piano,7 but it never was published, and Cohen’s legacy was bound to the few songs of his published in a pair of anthologies.