The St. Olaf Halvorson library, which I didn’t realize was called Halvorson until creating this writeup, has an incredible amount of scholarly articles, primary sources and of course, musical scores. Among these primary sources available in the library, this week I found a memorial study compilation of the work of Frances Densmore. Conversations regarding the ethics of Indegenous song collection have been very prevalent in my experience this year, and I hoped that this book would shed some more light on that song collection. Admittedly I had used this source as a means of data point collection, but the experience of reading this particular collection was very fascinating and speaks to the troubling nature of her data collection. 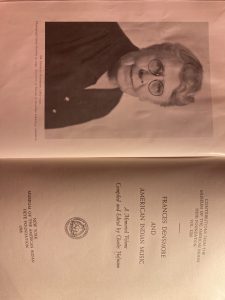 This book was a compilation of case studies by Frances Densmore, who had died before this was published in 1968. Seeing her words in retrospect present glaring issues regarding her placement of herself in her articles. The very beginning of this book includes a full page spread of Densmore, the clear protagonist of her story. There are plenty of instances where there are personal, almost humorous, asides included in her notation. Not only does this disrupt the reading, they are instances in a trend of Densmore centering herself and her white perspective in place of ethical research.

In describing the death of a Chippewa Chief, she places herself in the situation. After describing his death and the ritual following, she says “I never felt so alone”, giving herself the spotlight in this “academic” research. She goes on to say in another chapter, “Not for any money would I have parted with the sensation of having been the only white woman in a village of the most ferocious savages in the world”. There is problematic language to boot, selfish centering of this author in the research, among many sections of notating Native music using classical methods, which is to be expected. To our modern sensibilities, this language is very problematic and the exotisicm of Native people made the experience of my reading very jarring.

Seeing collections like Denmore’s is what makes Indigenous song collection troubling, and what focuses my group’s personal song collection. Too often the culture and music of Native Americans is minimized, trivialized and disrespected. It is a bittersweet fact that Densmore is one of the premiere researchers of Native American music in our history. While her work is quite valuable in retrospect, her methods could be improved greatly and it is our responsibility as music researchers to rise to that challenge.