Defining “American Music” has become a topic harder and harder to grasp for me. It’s like trying to summarize terms like “classical music”, “pop music”, any music… Where do you start?!? How do you end!? Who?! What?! When?!! etc. Though this topic seems quite hard to pinpoint, George Gershwin took a seemingly confident swing at it. 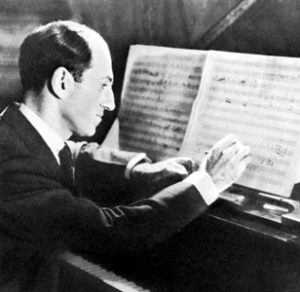 “And what is the voice of the American soul? It is jazz developed out of rag-time…”

This initial claim caught my attention. Surely he had an explanation- “a method behind his madness.” And sure enough he did. He goes on by clarifying…

“Does the American spirit voice itself in “coon songs”? I note the sneer. Oh, I hear the highbrow derision. I answer that it includes them. But it is more. I do not assert that the American soul is negroid. But it is a combination that includes the wail, the whine and the exultant note of the old mammy songs of the South. It is black and white. It is all colors and all souls unified in the great melting-pot of the world. Its dominant note is vibrant syncopation.”

There it is! From “coon songs” (i.e. minstrel songs) to being “all the colors” a part of the “great melting-pot”, the generalizations are not seldom in this handful of sentences. Gershwin was the son of Russian Jewish immigrants, and I would think that some of these immensely generalized statements came from his experience being raised by them. This fact could be seen in his next statement saying that if he was a first-generation American, his view of American life would be

Though I have no extravagant, bold claims or conclusions about Gershwin’s perspective and statements pertaining to American music and the responsibility he put on himself as an “interpreter of American life in music”, questions still fill my mind. Why did Gershwin feel the need to make these claims? What was pushing him to do so? How did his experience growing up with immigrant parents possibly affect this viewpoint? Despite his generalizations, is Gershwin on to something or is that not even something we should try to consider?

The questions don’t seem to end on this one, but nonetheless, there are many things to consider and contemplate about the big question: “What is American music?”.

(original primary source was nowhere to be found- but direct quotes are in Tick’s book!)