While I was looking through Sheet Music Consortium to determine my topic for this blog post, I decided I wanted to talk about representations of my hometown, Memphis, TN, and the perfect piece came up to do just that: “The Memphis Blues” by W.C. Handy.

“The Memphis Blues” originated as an instrumental piece1. This is important. Lyrics can totally change the impact of a song, especially if the lyrics do not match the initial message, or “vibe”, if you will, that the instrumental version conveyed. To demonstrate this, I decided to do a little experiment. I passed my headphones to a friend this weekend and asked him to tell me what thoughts and images came to mind as he listened to this instrumental version of the piece2. I made sure that he had not heard it before and that he did not know the name.

Unprompted, he said, “I feel like I’m walking down the street in a city, like a southern city, maybe Tennessee vibes… Oh, now I’m in a restaurant, like a barbecue restaurant, about to devour some ribs.” WOAH!!! That’s Memphis! (Granted, I think Memphis barbecue started closer to the mid-late 20th century, but still.) I said, “Wait, I didn’t accidentally say the name of the piece, did I? It’s called ‘The Memphis Blues’.” He affirmed that I hadn’t told him the title.

I then asked him to listen to a 1915 recording3 with lyrics by George A Norton, a white, non-Memphian, although, again, I said nothing about the version before passing the headphones.

He said that this version had a very different feel, and reminded him of New York, appropriated, white ragtime. Interesting. “The Memphis Blues” no longer seemed to reflect Memphis in the way that the original instrumental version did, but the lyricised version is what became popular.

So how and why did a white, non-Memphian’s lyricised version of a Black Memphian’s instrumental song about Memphis become more popular? It all began when Handy sold the song to the music publisher Theron Bennett (Handy later said that he felt he was cheated out of the rights to his song)4. Then, Bennett hired George A Norton to write the lyrics. Why? I believe Bennett was aware of the lucrative nature of minstrelsy, and knew that adding lyrics would help turn “The Memphis Blues” into a minstrel song. If you read the lyrics, you’ll notice there is lots of dialect, as well as commentary about the accepted musical roles for white people versus black people in the lyrics. Once the lyrics were written, Bennett convinced The Honey Boy Minstrels to perform the piece. 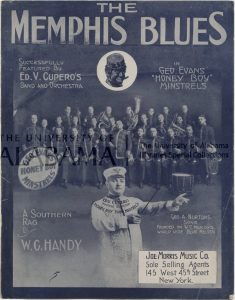 cover for the sheet music performed by the “Honey Boy” Minstrels5

It only took a few years for the song to enter into the mainstream, but once popularized, the song was forever changed. While the song has always been upbeat, I believe the initial, un-lyricised version sounds like a simple, genuine, upbeat nod to Handy’s home. Every recording I’ve listened to with lyrics seems to be for the purpose of a laugh.

In conclusion, if a song once was instrumental but now has lyrics, we should perhaps ask ourselves the question: Are those lyrics serving the original composer’s intent and the mood of the instrumentation? Or was the purpose to make money?