While researching in the Afro-Americana Imprints database, I came across the cover for sheet music dedicated to musician Richard Willis, which included music written by Francis Johnson. Immediately, I was interested in the identity of these men, particularly Francis Johnson. Initially, I found that he was born in 1792 either in Philadelphia or Martinique (A Caribbean Island), and that there’s not much known about his personal life, other than that he was a free black man who lived in Philadelphia. 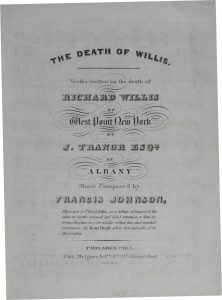 Upon further investigation, I found that Frank has the most impressive resume. It was rumored that he played all instruments, taught black and white students, toured the US and Europe, composed hundreds of pieces, and was gifted a silver trumpet from Queen Victoria her

self! This is especially impressive, given that during his lifetime, slavery was still thriving in the South. But this information is all from secondary sources, namely the African American Registry website, and the University of Pennsylvania archives website. I was interested in finding first-hand accounts of Francis and his music, yet it seems like there’s almost no primary source material available.

I tried searching the Frank Johnson Musical Association, band, players, groups, etc., to no avail. Almost everything was either irrelevant or about another Francis Johnson. I was only able to find one writing that mentioned the accomplishments of Francis Johnson the musician. It’s titled “Music and Drama,” published in the People’s Advocate, published in 1880. It reads:

“[He] could play on every instrument then known, In 1839 he visited Europe with a portion of his band and was rumored to play the silver six-keyed bugle… was a tutor on the bugle of Willis…  was a composer of no mean celebrity”

Upon further examination, I found that this was a republication of an article from a newspaper called the Elevator (which took a lot of sleuthing to figure out), which was most likely written by a woman named Jennie Carter. Still, I don’t know who that is or if she is reliable.

This has all made me ask: Why is it so hard to find information about this man who seemed to be so successful? Perhaps not much was written about him, but to me, it seems more likely that not much was saved about him. Although the white newspapers and print were getting archived and filed away, did black people have these resources? Once again I’m seeing how my view of black Americans is so hugely shaped by racist history and the fact that white people have always been in control. I find myself wondering if we can ever uncover the true history of black Americans.