In The Souls of Black Folk, W. E. B. Du Bois’s describes the religion of the slave with the “preacher, the music, and the Frenzy”

“The Music of Negro Religion… still remains the most orginal and beautiful expression of human life and longing yet born American soil.”

“The frenzy or ‘Shouting’… was the last essential of Negro Religion and the one more devoutly believed in than all the rest.”1

Black Americans’ Christianity has a long and complicated history in this country. While it is a direct result of the colonization of Africans brought to the United States against their will 200 years ago, Christianity provided enslaved Africans a sense of hope and security. When asked about their seemingly joyful mood one slave responded,  “We endeavor to keep ourselves up as well as we can. What can we do unless we keep a good heart? If we were to let it weaken, we should die”2. Christianity and music allowed for this in a time it might seem impossible. 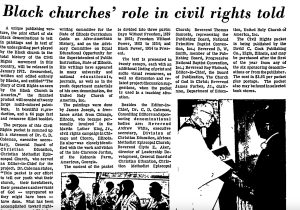 Christianity gave more than just hope to blacks in early America, it also played an important role in the advancement of their civil rights. The church influenced early rebellions, helped Frederick Douglass “find his voice”, as well as giving Rev. Dr. Martin Luther King an early platform. The Black Church even had a role in getting the Civil rigths Act of 1964 and the Voting Rights Act of 1965 singed as John Lewis, an ordained baptist minister, was present at both signings.3

Mirroring the sentiment from the seemingly joyful slave, Rep. John Lewis remarks on the everlasting need for hope in dark times, “The civil rights movement was based on faith. Many of us who were participants in this movement saw our involvement as an extension of our faith.”