A big question that I have been grappling with and something we have discussed in class has been the origin of American music, and more specifically, the role of slave songs in American music. We’ve touched on two opinions already in class surrounding this question at the beginning and middle of the 20th century; those of Henry Krehbiel and George Pullen Jackson. Krehbiel argues that enslaved people were the only people in America that were capable of producing true folk music because of their circumstances1 and Jackson argues that music from enslaved people in America was all taken from European music 2. After reading these opinions, I was interested in learning some other opinions surrounding this topic. 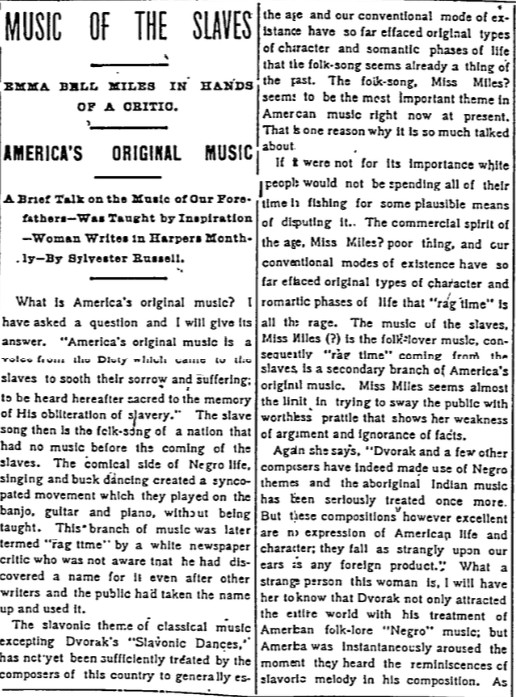 Luckily for me, I encountered a newspaper article that discussed this exact topic. Check out the full newspaper here. This newspaper article was written in “the Freeman”, an Indianapolis newspaper for people of color published on July 30, 1904. This article is titled “Music of the Slaves: America’s Original Music” and is written by Sylvester Russell who was a music critic of this era. In this piece, he is commenting on another article written by a woman named Emma Bell Miles in Harper Magazine. This essentially, is the 1900s equivalent of “clapping back”. Even the tone of this article left me laughing to myself. Russell is a savage and uses the most hilarious tone to trash Emma Miles. One of my favorite insults is: “Miss Miles, poor thing, like many lucky women, got a chance to write for a great magazine without knowing anything much to write about…”.

Russell states that Miles argues in her article: “It is generally believed that America has no folk music, nothing distinctly native out of which a national school of advanced composition may arise”. Russell does not like this at all, and argues that there is plenty of research being done on the folk music of American slaves, and in fact, the “advanced composition” that has come from this tradition did very much exist and that it is referred to as “ragtime”.

As much as I love this “clap back” article, I’m not exactly sure that Russell has fantastic evidence for his argument. And to be fair, it doesn’t sound like Miles had much evidence for her argument either. Russell at least gives a name to the music genre that has come from American slave songs, and that’s good evidence. However, as much as I love his condescending tone against this racist white lady, I think he might need some more concrete evidence to support his argument.