This week I found an 1874 article from the Weekly Louisianian, a black-owned newspaper that ran from 1837-1921. The article, titled “Our Country’s Shame,” condemned the United States for the prejudice with which they treated the touring musicians of color. The first musician they described was a virtuosic Mexican musician who was pronounced “a wonder as a violinist.” According to the article, the violinist was treated so badly in the United States that he went home early without even completing his tour. The article emphasized the violinist’s high class and noted that in Europe he was “respected by the nobility, from whom he received many admirable presents.” 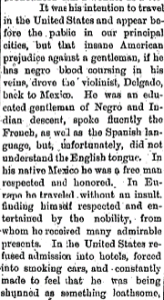 The second musical group they discussed was the Fisk Jubilee Singers, a prestigious African-American choral group from Fisk University in Tennessee. The article laments how the choir will be treated once they return to the United States form their English Tour (“OUR COUNTRY’S SHAME”). 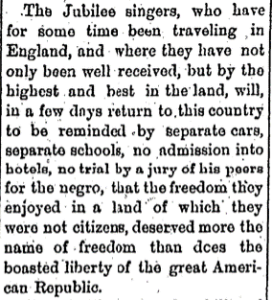 I was unfortunately not surprised by the level of racism that these musicians had received in the United States, but I was curious as to why it was so much better in Europe. In my search, I found an article by Allison Blakely titled “The Black Presence in Pre-20th Century Europe: a History,” which explains that while racism in Europe existed, discrimination based on class was much more common, as a person’s class was more important than their race (Blakely).

In addition, a Charles Seeger article titled “Music and Class Structure in the United States” explained how 18th century United States underwent a campaign to “make America musical.” In the 1800s, the upper class began to differentiate the religious and folk music enjoyed by the lower class from the concert music of the upper classes. This concert music often satirized and sentimentalized the lowest classes, especially African Americans. According to Seeger, this served as a way for whites to “think they were socially above [African Americans], even though both were poor, downtrodden, and unschooled. It offered ready compensation to the musical and cultural superiority-inferiority complexes of the cities” (Seeger) People of color to performing  in the prestige of the concert hall would challenge these superiority-inferiority complexes, threatening the white-supremacist attitudes of the 19th-century United States.