From the many sources we’ve read in class, we know that black American instrumentalists existed, playing many instruments that could be classified in the  “folk” or “blue-grass” genre today. In Eileen Southern’s book, we learn about the runaway slaves who were fiddlers, singers, and guitar players. We also know the banjo originated from a West African stringed instrument made out of a gourd.  (https://music.si.edu/spotlight/banjos-smithsonian). And from Rhiannon Gidden’s speech, we learned that bluegrass has always been a black genre. So I wanted to know: What stories do the pictures tell?

Factually, the same thing. These instruments have always been a part of black history. But of course, with almost anything from these time periods, the narrative is always in the hands of white people. And that’s especially true with the photographic sources that are available today. 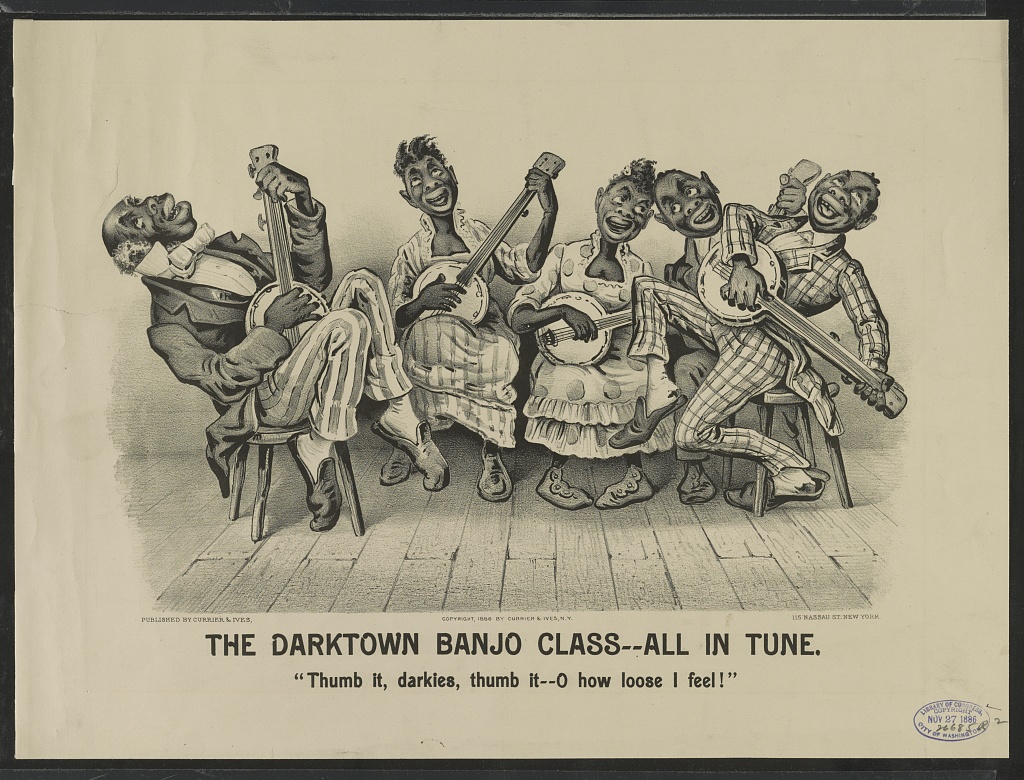 This first photo is taken from a popular (in the 1800s) cartoon by Currier and Ives called Blacktown, a satire aimed at making fun of black people. Its one of the first images that results from the search of the word “banjo,” yet we know that banjo was a popular instrument in black communities. Its a useful source to pair with Southern and Gidden’s points, because it places the banjo in the black musical canon, yet it’s entirely controlled by the white people who made it. This picture, from 1901, is of a “picaninny” performing child, a popular vaudville act, in which children performed for white spectators, often for humor, under the hand of a white adult female. The children often travel with the troupe without their families. Again, the mandolin places the instrument into the black music narrative, but the picture is likely taken by a white person for other white people. I find this picture especially disturbing, as the child is nameless, naked, and smiling (is she happy?). She is viewed as an object for entertainment; property to the act. This is another example of white people in control: not only of the picture and narrative, but of the life of this child. Although pehaps not as sinister, this 1902 image isn’t light-hearted either. Once again, we see the banjo and the player, yet he looks somber– Is it because a white man is taking his photo?

When looking at these pictures I keep asking: where is the joy? For me (and for most of us, I think) music is about expression, joy, happiness, and freedom. I want to see pictures of black people playing their instruments joyfully, like we know they must have; like Southern and Giddens both provide proof for; like we might’ve gotten if black people were allowed to control their own narrative.