While St. Olaf College has been well known for a strong choral program since its inception, as it turns out Jazz didn’t take long to become a part of music on campus. In fact, during the 1920’s Jazz music was regularly positioned as an opposing musical form to choral music. In a 1924 visit to St. Olaf by Princeton Professor Dr. J Duncan Spaeth, a Manitou Messenger article quotes him saying

“The production of your choir, alone would make St. Olaf a worth while institution,” said Dr. Spaeth. “To hear a choir sing classical music, and sing it well, in this age of jazz, is to me, a spiritual bath. I feel that people who have learned to appreciate the type of music sung by your choir, should also be able to discriminate between the genuine and the jazz in poetry, art, journalism, and drama.”1 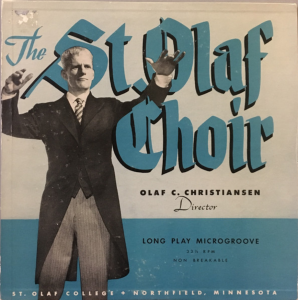 While Dr. Spaeth’s biases (he continues on to praise the “Nordic” appearance as “refreshing in comparison to foreign types” and makes an argument against co-ed teaching) undoubtedly reveals his racist sentiments about the value of classical music as superior to Jazz, he is not alone in this opinion. In fact, both choir and jazz come up many times in the 1920s and 1930s as moral opponents. However, students also expressed their frustration through the campus news paper. In 1933, a Campus Opinion article wrote this notable complaint

“Maybe people at large would begin to realize that actual human beings attended school at St. Olaf if our “Jazz Band” programs were broadcast. Why be afraid to admit that St. Olaf is not a monastery? Too many false presentations of Manitou life have already escaped. Surely the criticisms of a pep orchestra would be neglible in comparison to the criticism of other “evils,” if all were known.”2

A 1925 “Student Pulse” article started with the important claim that Jazz was not being played on the campus radio show despite possible students efforts to have it played.

“[Correction: An error based on misinformation as to facts inadvertently crept into the Student Pulse column of last week’s issue. Careful perusal of recent WCAL programs will disclose the fact that the station is not now, nor has it been broadcasting Saturday night “jazz” programs.]”3

While campus attitudes almost 100 years later don’t represent the same perspectives on choral superiority, the Vinyl collection is heavily skewed towards choral recordings. A quick library search yields 43 Jazz recordings, only one of which is by the award-winning St. Olaf Jazz Band whereas there are some 225 vinyl records by St. Olaf Choral Ensembles. Vinyl is particularly interesting in this context because it has been passed on as a preferred recording technique, and offers a snapshot of what the school was choosing to not only save, but to sell. The St. Olaf Jazz recording, on the other hand, is from 2017 and heralds a slightly more futuristic view of where St. Olaf Music could be going. 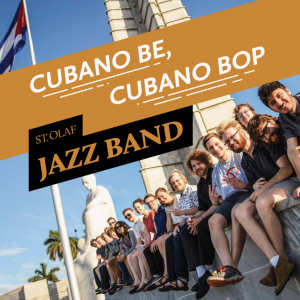 As a choir member on campus, I sometimes find myself quick to disregard complaints that St. Olaf Music favors the choirs too heavily.  However, in that act of dismissal I am engaging in a centuries-old practice of prioritizing a specific musical form which causes true detriment to the success of other types of music at St. Olaf. How do we celebrate legacies of music that are known for excellence and tradition when that recognition was partially entrenched by creating an environment that punished other types of music?