Why is it that bands are not held to the same standards as orchestras? This is what I found myself asking when reading a Manitou Messenger article from 2007 titled, “St. Olaf band pushed limits.” 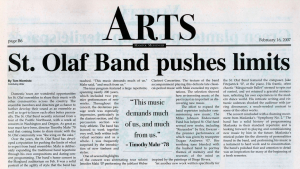 The “limits” to which the article is largely referring struck me as notably particular to the band world:

Over the years, the St. Olaf Band has developed a reputation for pushing the limits of what to expect from band ensembles. Mahr is deliberately expanding the traditional band repertoire through his own compositions and daring concert programming. The band’s home concert in the Skoglund auditorium on Feb. 8 was a solid portrait of the agility of style that the band has reached.

One of several highlights of the concert was alternating tour soloist Jennifer Maki ’07 performing the jubilant Weber Clarinet Concertino. The texture of the band accompaniment playing this delicate late classical-period music with Maki exceeded my expectations.1

Why is it that having the ability to play “delicate” music well constitutes “pushing the limits of what to expect from band ensembles”? Orchestras are certainly expected to be able to play delicately. The focus of the article is not on the quality of the band intrinsically, or as an undergraduate band, but basically that it’s very good for a band. This provides some interesting insight into the hierarchy of the ensembles. This also to me does not seem to be through any fault of the instruments themselves—woodwinds, for example, are known for their delicate sound.

Woodwind delicacy is one of the features of the Weber Clarinet Concertino mentioned above. To hear what may have been so impressive about a band arrangement of this, I listened a recording of the original orchestral version.

The first thing I noticed was the very heavy beginning, with the strings’ thick, full, not very delicate chords. This style does not dominate the piece, but is very present in it. There are delicate moments in the strings, but such a description is not as all-encompassing as the article had me thinking. The most delicate part of the piece is the clarinet part—the band instrument.

So then what makes a band performance of this impressive? Is it simply that the artistic caliber expected of bands is less than that expected of orchestras? Or maybe that bands are stereotyped as not focusing as much delicate playing? The latter would make sense if it’s not seen as a band’s specialty, where its strengths lie. But this leads to the assumption that such delicate playing is the strength of the orchestra, and again we have bands not being held to the same standards as orchestras, by a margin that seems to me much bigger than the actual difference in instrumentation would suggest. To give such an assumption so much weight seems wrong to me. So are the expectations of the writer are accurately based in bands’ abilities? Maybe not. But if so, why does this performance constitute “pushing the limits of what to expect from band ensembles”?