In 1971, the Archive of Folk and Jazz Music released a new record: “Pete Fountain: New Orleans All Stars.” On the back of the record packaging, there is a Statement of Purpose saying that the Archive wishes to bring historic jazz and folk records to the general public, as the modern jazz and folk music does not represent the “sincerity and soul of the [original] artists” 1

So, the Archive has taken it upon themselves to find and clean previously released records by jazz performers they find authentic who may have been robbed of the opportunity to record in a quality studio.

They hope to recognize these artists and ensure that the public is receiving top-notch recordings from “true” jazz performers.

“Pete Fountain: New Orleans All Stars” was one of those records. It was originally published in 1957 and featured songs such as “Jazz me Blues” and “South Rampart Street Parade.” Fountain was introduced to music early on, as his father played with various bands around Mississippi and Fountain eventually played with prominent bands before creating his own group, “Pete Fountain and his Three Coins.” In the records, you can hear Fountain implementing staple aspects of jazz, including blues notes and polyrhythm. 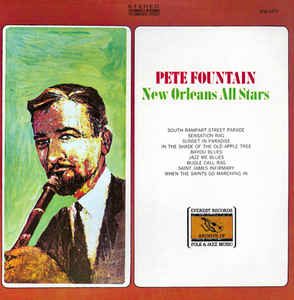 In 1956, only one year before Pete Fountain released the original record, the St. Olaf Manitou Messenger published an article titled “An Introduction to Jazz,” written by Allan Townsend. It was published in a section called “Arts and the Man” and was written in anticipation of pianist Don Shirley’s visit to campus.  Townsend writes, “At last the great white gods of the conservative circles have been forced to openly recognize Jazz as a truly creative art.”2 According to Townsend, Shirley is honored as the missing link between classical and jazz music.

However, Townsend opens the next paragraph with, “Without being burned for heresy, we can now look at Jazz for what it really is—America’s greatest cultural contribution to the creative arts of the world.”2 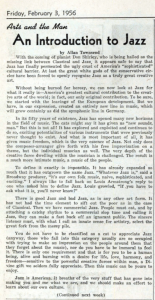 Townsend’s article in the Manitou Messenger

He finishes: “Jazz is American. It breathes of the very stuff that has gone into making you and me what we are, and we should make an effort to learn about our own culture.”2

Both Townsend and the Archive of Folk and Jazz Music take authority in determining what they think is authentic jazz. However, they seem to have a similar opinion that jazz is a product of American culture.

Sure, Shirley and Fountain are a part of American culture, but does that mean that jazz comes from America?

Whether Shirley and Fountain are “authentic” jazz musicians is a different question, but it is unquestionable that they are Americans who have infused jazz into American culture, not Americans performing American music. Jazz comes from roots all around the world; while Townsend and the Archive may want to claim jazz as America’s musical genius, it is simply not the case.