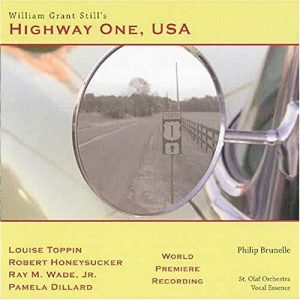 In 2005 St. Olaf Orchestra recorded William Grant Still’s Highway One, USA under conductor Philip Brunelle. This recording recently made national news in the New York Times’ article “Operas by Black Composers Have Long Been Ignored. Explore 8.” Here, the St. Olaf recording is linked as the go-to alongside a shout-out for a recording from Sony’s 1970s Black Composers Series. Luckily, both of these recordings are available through the libraries, the former in an online database and the latter in the Halvorson Vinyl Record collection. 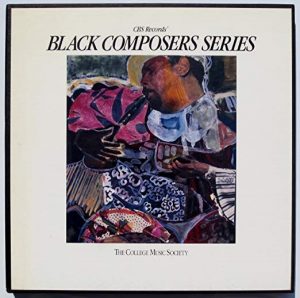 Cover of the Black Composers Series recording of Highway One, USA

The Black Composers Series is a 9-volume box set featuring works by William Grant Still, Samuel Coleridge-Taylor, Chevalier de Saint-Georges, Ulysses Simpson Kay, George Theophilus Walker, Roque Cordero, José Mauricio Nuñes-Garcia, and José White, among others. In addition to the arias “What Does He Know of Dreams?” and “You’re Wonderful, Mary” from Highway 1, USA, Still’s Afro-American Symphony and Sahdji: Ballet for Orchestra and Chorus are featured. The inside cover notes that this 1986 reissue was a project by the Committee on the Status of Minorities of The College Music Society in consultation with the Center for Black Music Research, firmly situating the album in a socio-political agenda of representation. 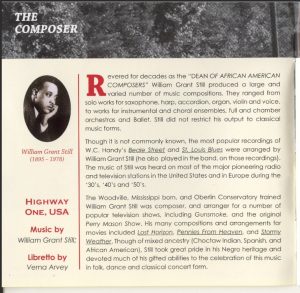 While the Black Composers Series is valuable in providing an anthology of recordings that have been often marginalized, St. Olaf Orchestra’s recording is arguably more in line with Still’s ambitions because it presents the opera without qualifying it based on the composer’s race. By presenting the opera as it would any other recording, the publication avoids further alienating or segregating works in the classical music genre.

Because the St. Olaf Orchestra recorded this in collaboration with the accomplished Twin Cities-based VocalEssence, I went into the Manitou Messenger archives eager to find content about the recording’s process and reception. Unfortunately, despite extensive digging I was unable to find anything about the recording. Much less notable concerts were covered, including what felt like an endless slew of post-tour home concert summaries.

Although I was unable to find anything about the recording session of Still’s opera, I was so excited to see the headline “St. Olaf Orchestra concert to feature wide variety of composers” come from a March 1996 article of the Manitou Messenger. Since we’ve been talking about racial representation in classical music, and performing works by marginalized groups is one way to reform this narrative, I was interested to see what this article had to say about the concert.

I was more than a little disappointed when the “diversity” I expected to see was no other than the white-boy trinity of Igor Stravinsky, Ralph Vaughn Williams, and Samuel Barber. In addition to being Euro-centric and commonly performed as a part of the Western Classical Canon (although perhaps not household names for those unfamiliar with the genre), they are all 20th century composers. The author does not address why he considers this to be a “wide variety.”