While browsing the LPs available at the St Olaf Halvorson Music Library, I came across an interesting find: 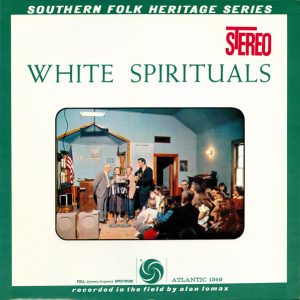 This is an LP entitled “White Spirituals,” recorded by the Atlantic Record Label in 1959.  It comes from their Southern Folk Heritage Series, and contains 14 songs (7 per side) of various style and origin.  The timing of the album is what brought my suspicion, as 1959 seems a peculiar time to publish such a collection, and remarkably close to the Civil Rights Movement.  In fact, the 1950s saw a resurgence of racially motivated killings and beatings, as well as less violent forms of segregation.  1954 saw the passing of Brown v Board of Education, which received quite a bit of pushback in many states throughout the US.  1957 saw the passing of the civil rights act, propelled by the protests of Martin Luther King Jr in Montgomery starting in 1955-1956.  1959, the year this album was published, saw Mack Charles Parker beaten in his Jail cell by a mob while he stood awaiting trial for raping a pregnant white woman.  Parker was lynched shortly after in a park.

This brief racial history of the 1950s in the US serves to give us a backdrop for this album and its insistence on “White Spirituals.”  If George Pullen Jackson is to be believed, all spirituals have their origins in white music.  In fact, George Pullen Jackson had written most of his work between 10-20 years prior to this albums recording, so its possible that the producers were familiar with his work and seeking to support his hypotheses.  Interestingly though, it seems as not all of the recorded songs would support Jackson.

There are three in particular that seem to point this album towards the path of cataloguing, rather than racial politicking.  A5-A7 are all songs in the Lining Out or Sacred Harp style, an easily identifiable style of music popular in the Appalachian and Southern Churches, although they were brought to prominence in New England before the independence of the colonies.  After seeing these three songs, I looked into the other artists and they are all quite prominent musicians of the southern Gospel tradition.  Estil C Ball is the most prominently featured musician, and he is a songwriter/singer/guitarist performing his own original music, informed by the bluegrass tradition in Appalachia.  This is to say, I don’t believe this album is a political statement towards the whiteness inherent in spirituals at all.  The title does not refer to spirituals in the “Negro Spiritual” sense, but rather songs of the south that are sacred in nature.

This is all a longwinded, and potentially completely unwanted explanation, on how my personal biases have been shown rather false.  I was struck and intrigued by an album called White Spirituals, and I hoped it would be a treasure trove of racist bile.  My confirmation bias led me to initially criticize the album for being published at such a time.  In the end, however, research won out and showed me an example of good musicological work with an unfortunate title.