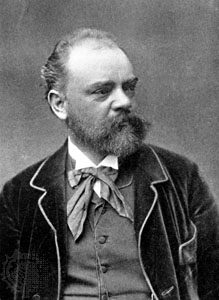 As we have read in the latest Shadle reading, Antonín Dvořák’s interest in involving black music into a specific American sound sparked controversy in the American classical world of music. In a letter, Anton Dvořák wrote to Oskar Nebdal, his former student and principle conductor of the Czech Philharmonic Orchestra from 1896 to 1906. The letter comes from Otakar Dvořák’s work, Anton Dvořák, My Father. The date of the letter is unknown but I believe its reasonable to guess it came after the publication of From a New World. Dvořák writes:

“I am sending you Kretschmar’s analysis of Symphony, but omit the nonsense that I used an American and Indian motif because it is a lie. I just wrote in the spirit of American national melodies,” (Dvořák 159).

After reading this passage for class, I had questions regarding the intentions and thoughts of this composer. After finding this letter, I have more questions. If Dvořák sparked so much controversy in America defending his stance of Negro music needing to make American music distinctive, then why leave out details for his friends at home. What does he mean by the spirit of American national melodies? In my last blog post, I discussed the spirituality involved in Negro Spirituals argued by H. T. Burleigh and Samuel Floyd Jr.
Perhaps Dvořák didn’t want to explain the race relations of America to his Czech friends and the controversy following him around. Another possibility could be the composer wanting credit for the music and not being told he stole from other sources.

I find this letter fascinating. While it makes a clearer image of the life of Dvořák during this time, it brings up more and more questions about the thought process of the composer and what occurred during this time for him.