In 1936, photographer Walker Evans released a photograph of a woman named Allie Mae Burroughs. She lived in Hale County, Alabama, with her husband Floyd and their four children, where they owned nothing: not even their home, land, mule or farm tools. The family of six leased these items (and more) from their landlord. Floyd was a cotton “sharecropper,” so at harvest time, he had to give his landlord half his cotton and corn crop, as well as pay off any other debts from the year, such as food, seed, fertilizer, and medicine.1

Allie Mae’s pursed lips, wrinkled brow, and tired eyes in the photo below record the hardships the family faced as a farm family during the Great Depression. 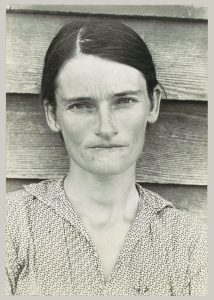 The Burroughs’ story was not an uncommon one for farm families living during the Great Depression, which also coincided with the Dust Bowl in the Midwest. This photo, among other Depression-era photos by Walker Evans, are what prompted Aaron Copland to write the music for the opera, The Tender Land. 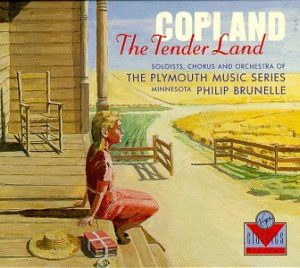 Cover of “The Tender Land”

The Tender Land is set in the 1930s in the general Midwest and premiered at the New York City Opera on April 1, 1954. It takes place at the time of spring harvest and a high school graduation, and features a Midwest family experiencing challenges such as family expectations and unapproved love.

The opera was not received well by critics at the time of its premiere. According to Copland in a letter to Carlos Chavez on April 5, 1954 (only 4 days after the premiere of The Tender Land), the negative comments regarding the opera were “criticisms about the libretto, and the usual complaint about a few melodies” 2

However, Christopher W. Patton explains in his article, “Discovering ‘The Tender Land’: A New Look at Aaron Copland’s Opera” that The Tender Land first premiered in between the New York City Opera’s productions of Don Giovanni and Figaro. He writes, “The Tender Land’s small, intimate scale, meditative, introspective libretto and strong but finely wrought emotional content were lost somewhere in the vast reaches of City Center” 3

Between the humor and grandiosity of Don Giovanni and Figaro, the subdued The Tender Land was lost.

Additionally, there is also something to be said at the timing of the premiere of The Tender Lands; music and theater are often used as an escape from reality. In 1954, the memories of the Great Depression, as well as World War II and the Dust Bowl, were still fresh in the minds of many Americans. While the music of The Tender Land was lovely, the plot and themes brought Americans right back into the realities of the past 15-20 years, rather than allow them to escape. Therefore, if attending an opera, Don Giovanni or Figaro may have been more attractive.

Copland blamed the negative response to The Tender Land on complaints of just some melodies and plot issues.  But, based on his letters featured in “The Selected Correspondence of Aaron Copland”, it doesn’t appear that he considered that the melancholy themes of The Tender Land brought Americans too close to the reality of, specifically, the Depression that still haunted their minds.

Now, audiences have a more positive response to The Tender Lands. In fact, now, opera companies add The Tender Land to their season, such as the Berkeley Opera in April 2010.

After the trauma of the Great Depression and World War II, Americans may have not wanted to see such relatable, recent hardships depicted in art. In today’s opera scene, without the Depression looming over our generation as it did in the 1950’s, The Tender Land may succeed and receive high remarks, even between Don Giovanni and Figaro, as it was in its premiere.