Sheet music tells us many stories. It brings us on a musical journey, and can provide entertainment for many through the accessibility of the copies throughout the world. The shortcomings and racism of the classical music world is evident through many cultural primary sources, some of the best of them being sheet music.

“Ma little lump ob Sweetness” is an American folksong is described on the cover as “A Darkey Serenade”, using blatant racism as a way to attract more people to buy it; a selling point to appeal to the racist masses. 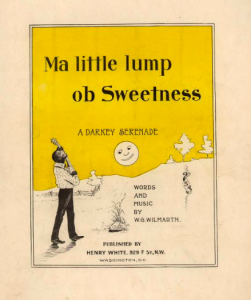 The imagery on the cover suggests simplicity is an inherent trait of African Americans, depicting the man as playing the banjo, which has historically been stereotyped as a black folk-song instrument.

When one opens the cover, they would see the lyrics to the piece, which match the same level of racism as the cover. It reads, “Honey youse ma little lump ob sweetness, ‘deed you sets ma heart on fire” (Wilmarth). The piece is clearly being written in a dialect that African Americans spoke with, and exaggerates it in order to make fun of them and their romanticism.

The lyricist and composer of the piece, W. G. Wilmarth was also a white man, making it clear the piece is just an offensive caricature of the racist way in which Wilmarth perceived African Americans to be.

The racist imagery and lyrics in this piece of sheet music is not unique to “Ma little lump ob Sweetness”, and unfortunately many of the familiar and catchy tunes from our childhood belong to songs that are just as offensive.