“Nobody knows the trouble I see, Lord,

Nobody knows the trouble I see,

Did you hear the tune in your heard as you read these lyrics? A tune that looks something like this? 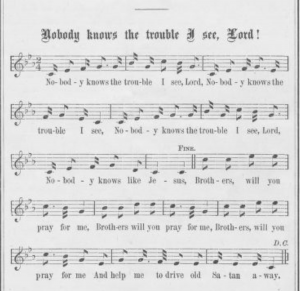 This image is from the collection of songs, “Jubilee Songs and Plantation Melodies,” published in 1885 by H.B. Thearle. According to the introduction by Harry Hanaford, the songs in the collection “were not ‘composed’ after the manner or ordinary music, but came to life ready-made, seemingly during the working and singing on the plantation” and that they are “giving a truthful representation of the negro as he appeared in the days of slavery” 1

The image above is the song “Nobody Knows the Trouble I See, Lord,” the first song in the “Jubilee Songs and Plantation Melodies” book. Based on the introduction, this song is meant to be regarded as a slave song, a bit of history in musical form.

Although since then, “Nobody Knows the Trouble I See” has been taken to Hollywood, where it has been used in movies such as The Lion King. The Hollywoodization of this song, among others, has caused the songs to lose their original motivation and meaning.

For example, in this clip from The Lion King, Zazu sits in a carcass and sings “Nobody Knows the Trouble I See” as he sits in captivity. After the first two lines, Scar throws a bone at Zazu and says, “Oh do lighten up, Zazu. Sing something with a little bounce to it,” to which Zazu humorously starts singing “It’s a Small World After All.” This scene is meant to be humorous and, although it’s an interesting parallel to slavery being that Zazu is in captivity, the fact that “Nobody Knows the Trouble I See” is presented as a method for humor negates this parallel.

On the flipside, other movies such as “Twelve Years a Slave” have redefined some slaves songs back to their original meaning and motivation. For example, in “Twelve Years a Slave,” the song “Roll, Jordon, Roll” is used at what appears to be a funeral. It is often seen as the scene where the main character, Plat, gives in to his situation (being kidnapped and sold into slavery) and releases of all his emotions since his kidnapping. Unlike The Lion King, this clip uses music not for a laugh from the audiences, but to help demonstrate the situational pain.

According to Henry Krehbiel in his book “Afro-American Folksongs,” he would argue that only the movies that are reclaiming slave songs and using them to demonstrate situational pain are the appropriate space to use these songs. He writes that white, Western inhabitants lack “the emotionaol elements which existed in the slave life of the plantations in the South and which invited celebration in song—grace and gay.” 2

Although we can’t put a race on Zazu as he’s a bird, we can assume that he has not experienced the same trauma that, for example, Plat has in “Twelve Years a Slave” that would give Zazu the motivation to sing “Nobody Knows the Trouble I See,” therefore demonstrating how Hollywood has taken slave songs and shifted their motivation.