In class discussions, the topics of advertising someone based on their race has popped up in conversations multiple times. In our context, we’ve only mentioned this in design of literal records. This article shows the same affect taking place or at least reinforcing that idea with a Teen Life magazine article written by Elvis Presley where he talks about his music. The preface to the article states, “A young lad born in Mississippi and whose singular style of singing has skyrocketed him to fame in his own words tells the simple truths about how a star is born.”

The entire article from here on, tries to defend the “original style” that Elvis has made for himself. Elvis has become controversial in the past few years for his appropriation of music by black artists such as hound dog (originally recorded by Big Mama Thorton. He states in the article, “A lot of people ask me where I got my singing style. Well, I didn’t copy my style from anybody. I got nothing in common with Johnny Ray, except we both sing-if you want to call it singing” (citation). As a modern audience, we can all agree this is not true at all.
Through a simple search on YouTube, we can confirm that Elvis took music and musical styles from black artists such as Big Mama Thorton’s original performance of the song “Hound Dog”. 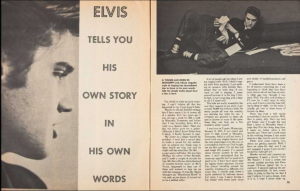 I doubt Elvis read the George Pullen Jackson we had to read for class and thought “Oh! Some of African American music comes from white countries, so it’s okay that I do this”. 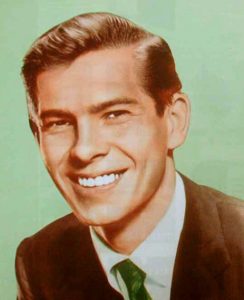 I can only think of two answers to Elvis’ intentions when writing these words that contradict his actions. Either, he is a big fan of the works of George Pullen Jackson and believed the work to be his or due to multiple factors in the past decades, it was completely acceptable to just take work from black artists if you needed to support yourself and your family. In the article he focuses on how his success has helped him and his poor Mississippi family. Johnny Ray, a white singer who also borrowed from a lot of black artists, is the only one Elvis acknowledges might have a similar style.