Since studying it in AmCon, then again in AMST 301, I have been fascinated with Jimi Hendrix’ version of the Star Spangled Banner that he performed at Woodstock in 1969. This version of the national anthem is warped and distorted, a reflection of the political climate in America at the time. Coming out of the ‘50s, Americans in the early ‘60s believed they were in somewhat of a golden age. With the assassination of JFK, the Vietnam War, and the struggle for Civil Rights, it became clear that the 1960s were not to be a golden age, after all. Hendrix’ version of this patriotic anthem is representative of a shifting idea of what it means to be an American and a patriot at a time in which our nation is fraught with so much disaster.

This New Yorker article claims that “Jimi Hendrix’s Rendition of the ‘Star Spangled Banner’ is more relevant than ever”, by linking Hendrix’ performance to Colin Kaepernick and the NFL protests. This comparison is particularly important because of the nature of the Star Spangled Banner. Kaepernick protests the anthem, not in spite of his country, but in spite of an administration that he believes threatens the country that he loves. In this article, Hendrix’s political statement is deemed a “psychedelic citizenship,” meaning that Hendrix does not reject his country by performing such a warped version of the anthem, but rather that his performance emphasizes his American identity in his call for recognition of horrendous acts by Americans and American administration. By performing the anthem in such a way, in such a public place as well, Hendrix acknowledges himself as a patriot in his own right, one that acknowledges the down-fallings of his country while still “[acknowledging] the promise and potential of the nation.” This same statement applies to Kaepernick.

Though we can retrospectively view Hendrix’ Woodstock performance as a performance of “psychedelic citizenship,” like Kaepernick, this act did not go without criticism. In this article from the Berkeley Tribe in 1969, the same year of Hendrix’ performance, the author writes of the Anti-Riot act as an attempt by the government to silence backlash against atrocities committed by the administration. 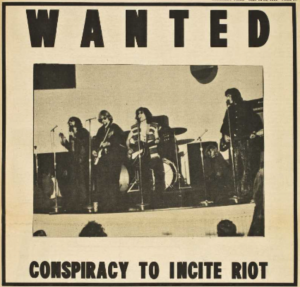 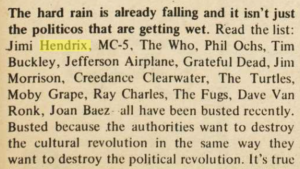 In a similar vein to Kaepernick today, artists at this time were punished for using their platforms to critique the American government. While Hendrix was calling attention to the Vietnam war, Kaepernick brings to light the issue of police violence that plagues our nation. These protests are not against America as a nation, but rather the perversion of American and human values.

If you’re interested – for my final project for AMST 301, I made a found footage music video to Hendrix’ Woodstock rendition of the national anthem (which is too big to include here but I’d be happy to send it as a google drive link).