For this week’s blog post I found an article from Rock magazine that was published in 1972. The article “Portrait of Two (Funky) Ladies”, written by Toby Goldstein, depicts the music and backgrounds of artists Sandy Denny and Merry Clayton.  The characterization of these two female artists by the male author helps to expose the one-dimensional ways in which the world viewed women in music at the time of the article’s publication. 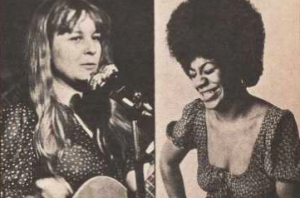 The ways that Goldstein portrays them is very much as if he is trying to make the point that women can have personalities and depth, as if the default is to think that they do not. About Denny he continuously mentions her range, “In one hour, it is not surprising for Sandy Denny to sing ballads, a Dylan tune, some old-time rock‘n’roll, and even acapella with the band” (Goldstein). Of course the variety of the artist is of interest to potential listeners, but I feel the emphasis of his writing is on how surprising it is that she does this, not commending her musicianship and versatility. The same is done for Merry Clayton, describing her work in an admirable way, but also demeaning her in the same sentence. Goldstein states that “Merry Clayton is a woman possessed to work” (Goldstein). Although this is a compliment of sorts, a man with an identical work ethic would simply be described as “dedicated”, not “possessed”, as that word implies that there is some other force propelling her success other than her own practice and talent.

Another way in which Goldstein could’ve represented the women better was the order of the features of the artists within the article. He features Denny for about 90% of the first page, only getting to Clayton right before the page break. Although this is just a layout issue, I feel that Clayton should have been highlighted first, as her name is alphabetically before Denny’s. Mainly, I find issue with this because Clayton is a black woman, and is already facing more push-back in the music industry than Denny. This issue is more excusable, as in 1972 it was very significant to have a black woman featured in a rock magazine at all, but Goldstein could’ve helped to break down barriers more quickly had he put Clayton’s section first, in order for readers to learn about her work before they lose interest in the article, as many read magazines in a style likened to channel-surfing.

These critiques are of rather small details within the article, but the truth of the matter is that is far better that this article was written than not having it at all. From a modern standpoint, it is easy to pick out flaws in the author’s writing, but the intent and outcome of the article is still overall positive.