Billy Graham was a remarkably powerful Evangelical preacher who fostered a rebirth in Christian enthusiasm post-WWII. This movement was led through effective media appearances and “crusades” in which Graham’s organization would rent out stadiums or other large spaces to host elaborate religious services for crowds in the tens-of-thousands. An important component of these services was the musical prelude to Graham’s sermon. The Chicago Defender1 reported on a 1962 Chicago Crusade in which George Beverly Shea, the famed soloist for Graham’s services is honored as a hometown hero. 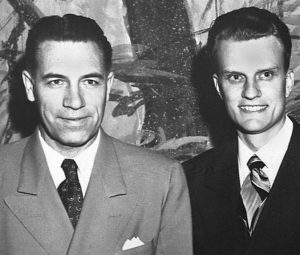 George Beverly Shea was born in Canada in 1909, and after moving to the U.S. he eventually began a career which captivated radio, TV, and festival audiences. Shea’s popstar-adjacent promotional opportunities and close personal ties with Billy Graham led to consistent performances intertwined with religious power. The Evangelical church has since been known for savvy music marketing, George Beverly Shea likely being an early example.

“As an imitation of contemporary secular music and fashion, contemporary Christian music bolstered the identity of young evangelicals who feared being alienated from their peers because of their religious faith. At the same time, however, by its incessant promotion of media consumption, the contemporary gospel industry subtly affirmed American materialism..” – William Romanowski2

In a 1970 edition of the music magazine “SuperStars” on Johnny Cash3, this image of Johnny Cash and Billy Graham is captioned “Johnny and Dr. Billy Graham discuss possibility of joint appearance in Tennessee” as the two talk closely. Cash and Graham were known to be close friends throughout their lives, and Cash performed at multiple “crusade” concerts. 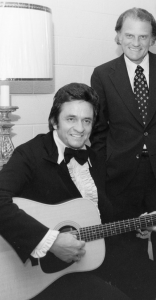 Music, religion, and power have always been closely intertwined in America, but the marketing of religion alongside popular music is something relatively new. George Beverly Shea, Johnny Cash, and their relationship to Billy Graham as advocates for Christianity while still being working musicians with wide audiences adds another layer of market segmentation. While Shea was firmly a gospel performer, Cash is remembered as a country singer yet they still benefitted from the same audiences. At what point did Evangelical music blend into mainstream performance and at what point did it become hard to hear the difference?