While the most recent course readings and discussions have focused on the (relatively little) good and (predominantly) bad effects of minstrelsy, discussion of other black performance in the 19th century has been limited or in passing. While browsing the archives of the African American Newspapers database, I came across a name that was mentioned multiple times in a few articles about black vocal performances in the Washington D.C. area in the latter half of the 19th century. A “Mrs. Smallwood” was cited multiple times for her performances at various churches. Further digging revealed Agnes Gray Smallwood to be a vocal performer, with multiple newspaper articles hailing her as an outstanding performer. 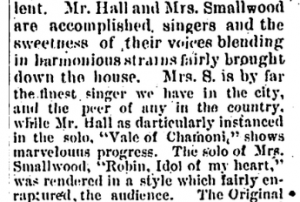 In this newspaper review, Agnes Smallwood is hailed for her solo singing after a concert given at a local church.

This announcement was found in many papers, noting Mrs. Smallwood’s achievement, yet failed to mention specifically which church she would sing at.

Mrs. Smallwood was a part of a group of singers that formed the little-known Colored American Opera Company, America’s first opera company for black singers. The group rose out of the need to raise funds for St. Augustine Catholic Church in Washington D.C., a catholic church that has long established itself as the “mother church of black Catholics”. The church established itself as a haven for free blacks in the final years of the Civil War, and has since been a spiritual and cultural refuge for blacks.

Although I could not find any video or other media related to the Colored Opera Company, take a moment to view a short video about St. Augustine Catholic Church and how the work of the opera company lives on today in this unique catholic church.

Although there were newspaper reviews praising the voices of colored singers with no conservatory preparation, any sort of monetary or moral support appears to have come from within the black community (despite evidence that white audiences attended the opera performances and enjoyed them). The opera company was formed in a short term effort to raise funds, so there appears to be no long term musical consequences from the formation of this opera company- it did not last beyond the short time the group performed to fundraise for the church. It appears Agnes Smallwood and her peers in America’s first black opera were victims of the selective history we’ve discussed in class. Despite creating opportunities for themselves as artists in a time when barriers hindered access to the art music of upper-class whites, Mrs. Smallwood and the legacy of the Colored American Opera Company have failed to get much recognition over time. They live in the dark shadow of minstrelsy, a legacy that imposes itself of the narrative of black musicians and music in the 19th and early 20th centuries. But, it is important to acknowledge their work where we can, and understand how their influence on places like St. Augustine Catholic Church live on in black music and experiences today.

Secondary Sources have been hyperlinked in the prose above.