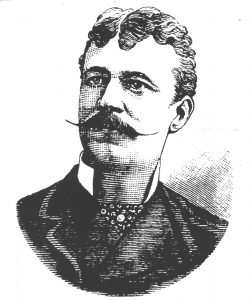 Here is a picture of William “Billy” Emerson

As talked about in class, blackface minstrelsy that originates from the United States. This form of racism borrows from the Italian theatrical form of Commedia Dell’arte as well as multiple musical practices (a form I have performed and trained in). This performance practice came to feed into a culture of racism and uphold the constructs of whiteness and blackness in the United States in ways that affect our contemporary society. It’s also important to recognize how this form became seen from an international perspective.
In an 1885 article of the Huntsville Gazette, a newspaper based in Alabama, there’s an article called “Two Noted Minstrels, Who Have Won Fortunes and What They Say About Stage Life”. The article discusses the minstrel performer “Billy” Emerson who immigrated from Scotland to pursue a life on stage. Many assume that performers were only white American men but blackface became so popular during this time that shows went on international tours.
The article says:
He visited Australia in 1874 and on his return to America joined Haverly’s minstrels in San Francisco at $500 a week and expenses. With this troupe he played before her majesty, the Queen, the Princes of Wales, and royalty generally.

In class we discussed how common minstrel shows at the White House had become but rarely are the performances for European royalty recognized. This is an example of non-Americans working in an American form or being exposed to an American form. Europeans took part in blackface Minstrelsy but my question becomes “Does this form become entirely tied to an American sense of identity such as the mime for the French or Commedia Dell’arte for Italians?” This past performance practice became capitalized on and I worry blackface minstrelsy is the only American form we are known as a country for during this century. Thinking internationally, I question how this form we made affected racial constructs in other countries.