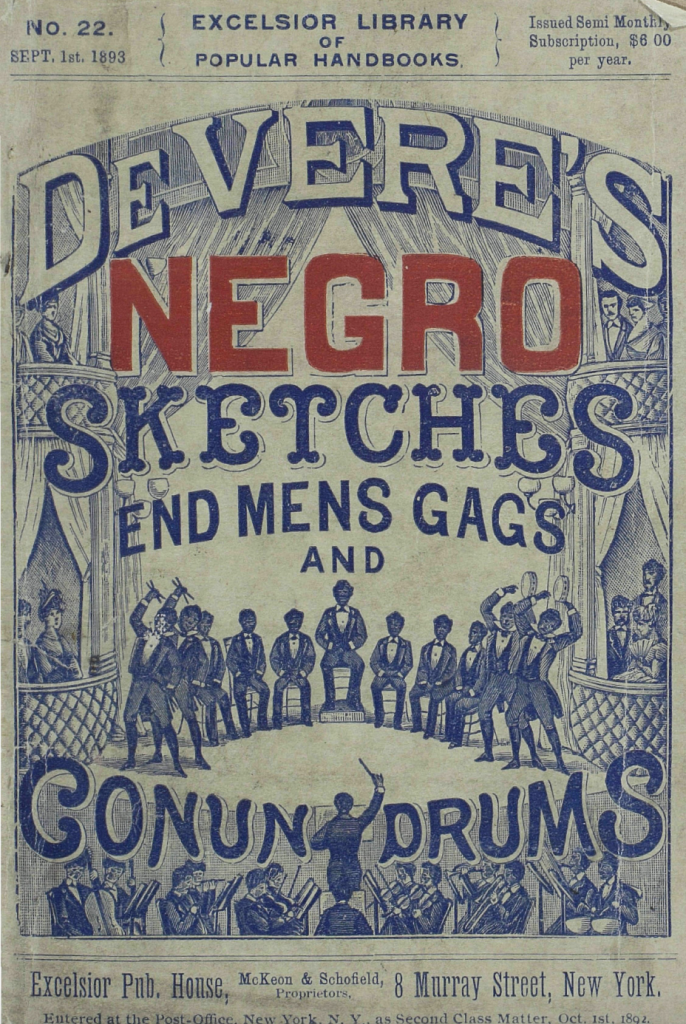 Note from the author: Originally when I found this primary source, I made connections to a phenomenon I had been observing around me in the music industry—“blackfishing.” I went on to research more about what could be called modern-day blackface performing. I referenced Instagram posts and Ariana Grande’s style evolution. This research, while enlightening, drew little from what the primary source had to offer to me.

Now that the course is wrapping up, I realize that the way I approached this primary source was much how I approached this course. When we discussed difficult topics such as blackface minstrelsy, I tried to understand them based off of my own experiences. I can now see that this method is not conducive to gleaning the most knowledge. Thanks to the experiences of this course, when I now approach a new topic or a new primary source, I aspire to draw directly from what it presents to me, instead of forcing it into my perspective. Now, I allow the primary source itself to teach me about the topic.

With this growing perspective, I present renewed thoughts on this primary source…

DeVere’s Negro Sketches[1] was published in 1989 with this cover illustration demonstrating a stereotypical blackface minstrelsy scene. It shows performers with faces unnaturally darkened arranged in a semi-circle, men dressed in dapper outfits while positioning their bodies in angular stances, and of course, an all-white audience in attendance. From analyzing this illustration, we can learn more about common opinions and views of minstrel shows.

The first thing I noticed is that the audience is positioned above the performers… literally. This signaled to me a direct symbolism of the common view that black people were inferior to white people. Did white people attend minstrel shows to confirm their status as higher than black people?

The second thing that caught my attention was the illustration’s word choice when referring to the performance. It calls these performances “gags” and “conundrums.” When I think of a “gag,” I think of a silly joke that one tells knowing of its ridiculousness. A conundrum, on the other hand, has a double meaning. The first is a confusing question. The second is “a riddle, the answer to which involves a pun or play on words.”[2] Dictionary.com provides an example of a conundrum: What’s black and white and read all over? A newspaper. This gives modern observers of the illustration an idea of the type of comedy that the music from DeVere’s shows flaunted at the black experience’s expense.

Nearly 40 years later, this stereotypical humor persisted in the music performance sphere. In The Plaindealer, a columnist writes:

You know there hasn’t been a successful colored music comedy yet that didn’t have liberal sprinklings of what whites are pleased to call “typical Negro humor.”[3]