Reading the melancholy words of an 1841 poem entitled “The American Indians,” I can practically hear the final F major chord of Edward MacDowell’s “Indian Idyl” fading gently into the background. The two works could easily be based on each other. In her poem, Emeline Smith describes Native Americans as “passing away like a dream,” a sentiment echoed perfectly in the soft closing passage of “Indian Idyl”.1
As Daniel Blim discusses in his paper, MacDowell’s work evokes a wistful nostalgia that reflects a white American vision of a cohesive Native American culture confined to the past. According to Blim, this is just one instance of the “vanishing Indian” ideology, an assertion that is supported by the presence of the exact same sentiments in Smith’s poetry.2

Emeline Smith, writing her poem as an entry in the monthly issue of A Lady’s Companion, is blatant in her perpetuation of the “vanishing Indian” trope. She refers to Native Americans as “doom’d,” “passing away like a dream,” and even “hastening on to decay,” clearly displaying the same attitude we discussed MacDowell as guilty of during class.3 Smith treats Native American life and culture as a relic of the past. What MacDowell does artistically in his New England Idyls, Smith does verbally in her poem. 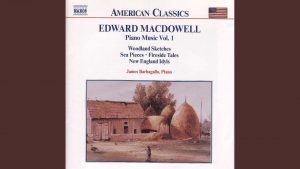 Furthermore, the title of Smith’s poem, “The American Indians,” implies that the subject will have something to do with Native American life or culture. What follows the title, however, contains little more Native American identity than superficial references to “chieftains,” “warriors,” and “relics”. Even in her remembrance of Native Americans, the only details Smith describes are a warrior’s shout and the “low music” of an echo of Native American life that lingers in the hills.5 These two auditory remnants simultaneously represent a distant memory of a powerful culture and a dwindling present existence – exactly what we hear in MacDowell’s music as well. The lively opening passage (a “warrior’s shout”) reflects a dramatized view of Native American life, while the way each phrase subsides into nothingness (“low music”) marks this life as something of the past.6

What struck me most about Smith’s poem was how evident the “vanishing Indian” perspective was in a seemingly ordinary piece of poetry. If it took me only a few searches and clicks to stumble upon such a blatant example of the “vanishing Indian” ideology, then surely this is some indication of how pervasive the concept is. From music to poetry, representations of Native Americans as a vanishing race are ubiquitous.

1 thought on “The “Vanishing Indian” Ideology in 19th Century Poetry”