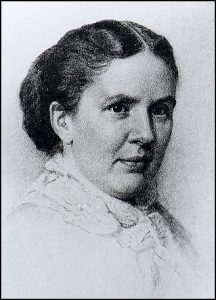 Alice Fletcher (1838-1923) was an American ethnologist who worked for the Peabody Museum of American Archaeology and Ethnology. She extensively studied the Great Plains Indians, and was frequently able to gain their trust and immerse herself in much of their daily lives. She recorded and transcribed hundreds of songs and recorded observations of their rituals and music (using Western notation, similar to Frances Densmore). While she seemed to care about the Native Americans she interacted with, and even helped one woman get a loan to attend medical school, she also advocated for the Dawes Act, which redistributed reservation land and broke up tribes with the goal of assimilation (1).

This excerpt narrates her experience living on an Omaha reservation. She begins by asking to observe a dance, and her “Indian guide” leads her to a white tent filled with men and women sitting around a large drum (2). She states, “I was startled by a sudden mighty beating of the drum, with such deafening yells and shouts that I feared my ears would burst” (page 1); this echoes Drake’s description of Native American singing as shriek-like. As the music and dancing continues, she describes, “I felt a foreignness that grew into a sense of isolation…I was oppressed with its strangeness…It was nothing but tumult and din to me; the sharply accented drum set my heart to beating painfully and jarred my every nerve” (page 2). She doesn’t see the sounds she hears as music because it doesn’t sound like typical Western classical music, and she, along with many others, holds Native American music to a Western standard. She additionally writes, “The outstretched arms brandishing the war-clubs…called up before me every picture of savages I had ever seen,” calling the Native Americans “terrible creatures” (page 3). The use of the word “savage” relates to all of the course readings we have done so far, which contrast the white view of Native Americans as violent and savage while also nostalgic.

However, in the next paragraph she says that she later “had a laugh with her red friends” over this incident; she sees some Native Americans as savages, and others as her friends. Fletcher grew ill and Native Americans would come sing softly to her without a drum; “the last vestige of the distraction of noise and the confusion of theory was dispelled, and the sweetness, the beauty, and the meaning of these songs were revealed to me…from that time forth I ceased to trouble about scales, tones, rhythm, and melody” (4). She seems to finally realize that she shouldn’t base all musical analysis off of Western scales, and finishes her account by describing different types of songs and transcribing several.