As an Iowan growing up in a college town, Saturday football games were unavoidable. I’m from Ames which is home to the Iowa State Cyclones, and the biggest game of the year is when we play our in-state rivals the University of Iowa Hawkeyes. This last weekend was the biggest rivalry game yet, when some 160,000 extra people came to town just to celebrate and watch football. So when I went searching for a text that stood out to me, I was stopped in my tracks by the words written for a celebratory song called “The Proud Hawkeye State” by Richard B.B. Wood. I found the lyrics as part of an 1884 reunion for “The Tri-State Old Settlers’ Association of Illinois, Missouri, and Iowa”1 to be performed after a series of speeches celebrating what it meant to be an “Old Settler,” or in this case, someone who lived in one of the states prior to 1860 or who had been there for the last 25 years. Amid the triumphant chorus these lines stand out to me

They were long and tedious hours

When we sought these western bowers

In that time long ago

Now this happy land is beaming

Bright as angels that are dreaming

With the harvest that is teeming

On our own Hawkeye soil

Iowa became a state in 1846, only 38 years prior to the year the convention was held. While it is unclear, the general consensus by Iowa historians is that the “Hawkeye” nickname comes from fans of “The Last of the Mohicans” an 1826 novel by James Fenimore Cooper set during the French and Indian War in which “According to Cooper’s story, the Delaware Indians bestowed the name of “Hawkeye” upon a white scout and trapper, who lived and hunted with them, who also braved their perils in war against the Iroquois and Hurons.”2
It seems absurd but the nickname was bestowed by white Iowan newspaper men, inspired by a story by a white writer, in which Native Americans give a white man a Native American name. In Iowa, almost all of the Indigenous population was forcibly removed by the government by 19303, except for the Meskwaki Tribe which still exists to this day, so when this reunion was held there were likely attendees who were very familiar with this history. 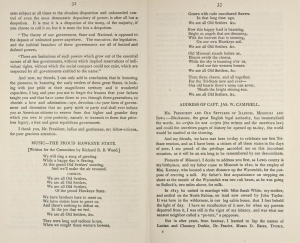 The Tri-State Old Settlers’ Association of Illinois, Missouri, and Iowa

In Dan Blim’s “MacDowell’s Vanishing Indians”4
Blim explores the concept of the “Vanishing Indian” as demonstrated in Edward MacDowell’s compositions. Blim explains that by creating art that claimed to eliminate any threat from Native Americans, Europeans could incorporate that imagined other into their cultural heritage, and that by establishing that Native American culture had “died,” it outlined white, European culture as something triumphant and unifying.

Similarly in these lyrics, Richard B.B. Wood celebrates  “Old Settlers” as a powerful group of people who arose from some sort of tension to create a shining and glorious land on “their own Hawkeye soil.” However, while history is no doubt alluded to with racist coding like “rude uncultured flowers” these tribes are never named. The song is more about proving the excellence of the “Old Settlers” whose identity is literally grounded in economic prosperity tied to the richness of the land.

The act of singing a song meant to celebrate an identity in opposition to something is unifying. Anyone who cheers for a certain sports team can feel a sense of camaraderie with perfect strangers if they wear the same colors as us, hate the same people as us, and sing the same song as us. In the case of “The Proud Hawkeye State,” the team is the “Old Settlers” and the opponent is effectively unworthy of a name since it was defeated. “The Proud Hawkeye State” claims that something that once was “uncultured” has now been replaced to use a farming analogy as Iowans love to-do, it was uprooted.

4Blim, Daniel. “MacDowell’s Vanishing Indians.” Paper presented at the Annual Meeting of the American Musicological Society and the Society for Music Theory, Vancouver, BC, November 2016.