As a part of a personal diary, William T. Parker, M.D. and Indian War Veteran of the U.S. Army, wrote of his experiences with Native American populations and peoples in New Mexico, California, Canada, and Kansas between 1867 and 1885. 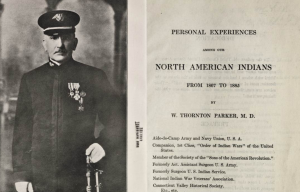 The section of his journal I found most topically interesting and pertinent to our class learning is titled: “Concerning American Indian Womanhood – an Ethnological Study.” In this section, Parker discusses the role of women in music and the arts in Native American society.

Parker places most of the importance of this section of his writing on, what he takes to be, the poor prioritizing of Native American tribes. Unlike Macdowell’s “Vanishing Indians,” Parker’s writing does not discuss attempts to appropriate and commodify Native American music and art for white consumption, but instead belittles Native American emphasis on music and art. He consistently reinforces his biased belief that American Indian populations place too much importance on art, music, and religion, and not enough on health and traditional (European) gender roles, with respect to home life. He names Native American women as the reason for the poor education of children, particularly female children, in that they are taught music and art before they are taught homemaking skills. He also blames spikes in women’s health issues on this “poor education,” saying “if hygiene and manual labor could be looked after more carefully, then might follow the cultivation of the arts.” In stating this, Parker ignores the intersection between religion, the arts/music, and health, that we know existed and still exist in Native American culture, particularly the medicinal qualities of Native American music.

Parker’s accounts and opinions of his time spent with Native American populations seems typical of someone of his background at the time of his writing. Unlike Densmore, he did not write critically about Native American lifestyle as a viable and rich culture, but instead stuck to a pre-defined, Eurocentric view of what makes for an acceptable lifestyle.

Blim, Daniel. “MacDowell’s Vanishing Indians.” Paper presented at the Annual Meeting of the American Musicological Society and the Society for Music Theory, Vancouver, BC, November 2016.

1 thought on “Music as a Priority in Native American Culture”