This artifact intrigued me not necessarily the word, “uber” which is seen nearly of every street corner of most major U.S. cities today in the form of a car. Rather, what caught my attention was the name, “Guadaljara” which is actually spelled Guadalajara today. This is where my parents were originally born, near a city with a name derived of an Arabic translation, as stated in the official Ayuntamiento de Guadalajara website.

“In its distant origins, Guadalajara was linked to Celtoberian culture, though the earliest historical references tell of its strategic military importance to the emirs and caliphs of Córdoba. It was then known as Madinat al-Faray in memory of its conqueror, and Wad al-Hayara, Arab translation of its pre-Roman name, Arriaca.” (Guadalajara.se) 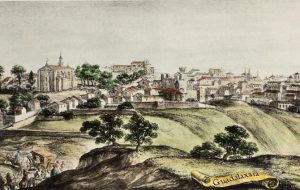 My father actually went to college in Guadalajara, and had essentially gone through what I am experiencing now, “a home away from home.” His decision to sacrifice that education in Guadalajara in Mexico just to seek a better quality life in the United States without citizenship has allowed me to write this blog on this St. Olaf webpage for today. Had he not done so, I would not be here, in this very moment, writing this blog. Now you see why Guadalajara caught my attention. This city’s name creates an emotional response in myself because it symbolizes my family’s origins.

According to a dear friend and Berlin, Germany native, Leander Krawinkel, the title translates into — “The Map which shows the directions and through which ways the Aztecs emigrated to Mexico” Aztecs were a group of the indigenous peoples who occupied a majority of the territory of today’s Mexico. By this account, it is fair to state that this was one explorer’s observation of how the indigenous people lived and traveled in their land. However, one may be skeptical of Berghes’s perspective on these people’s reason for migrating. 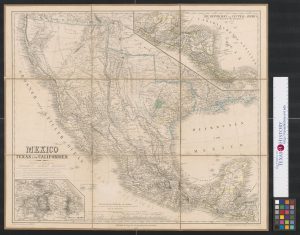 In this following image of a map titled, “Mexico, Texas und Californien” by a German explorer, Heinrich Kiepert indicates the different locations of French and German colonies near Mexico. This is significant because it is a clear reminder to all that that which makes up today’s Mexicans ethnically, around the world and especially the United States, is not just Spanish and Aztec blood, but also German and French blood, as evidenced in the presence of these European explorers in these areas. These cultural encounters were written solely from the perspective of the European explorer’s eye. This blog analysis should aid in the modern Mexican and white-American community’s understanding of their ethnic diversity and similarities as a whole, in hopes of encouraging a more united attitude rather than a separatist attitude from both cultures in a time of political and racial turmoil.