What on earth could Steely Dan, The Doobie Brothers, and St Olaf all have in common?The band “Judd.” The Judd Group found popularity in the 1970’s with their original songs and covers of the music of Steely Dan and the Doobie Brothers. They toured for 10 years, had two hit singles, and opened for Lynard Skynyrd, The Beach Boys, and Tina Turner. A group of a few white, midwestern young men, their sound, which infused black music traditions into their rock sound (such as blues, soul, jazz, and folk), stands as a hodge podge representation of more popular bands of the time. 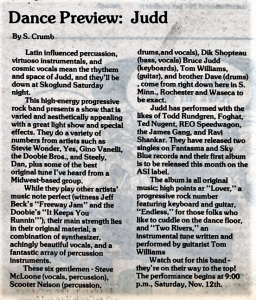 On Sat., Nov. 12th, 1977, Judd played a gig at St. Olaf College in Skoglund Auditorium. As the equivalent of the current St Olaf MEC fall concert, it was quite an event. Their covers of the Doobie Brothers’ “It keeps you Runnin” and Jeff Beck’s “Freeway Jam” were well received.The Manitou Messenger covered the group and praised their playing and overall entertaining.

They drew inspiration from Steely Dan’s incorporation of jazz into rock, and from the Doobie brother’s use of folk and later soul music into their work. These groups all help represent a movement from the 60’s and 70’s of incorporating black music genres into rock music. As we can see, this movement was quite popular, and I think we should consider the implications from this.

Since popular rock bands incorporated certain genres in their sound, they essentially bridged a gap between their sound and genres often associated with black Americans, like jazz, soul and blues. They labelled themselves as “folk rock” – but more accurately, it was “black folk rock” – though it was more often than not sung by white musicians.

This could be seen as a good thing – a way to expose these genres (which admittedly had exposure already from plenty of other white performers and POC’s) to a crowd which was perhaps more concerned with rock and newer genres. However, I believe that it also helped erase some of those older black folk genres and create impressions of these genres that weren’t necessarily true.

In the Manitou Messenger article above, for example, the reviewer refers to the percussion of the Judd group as “Latin” inspired, but on listening to examples of the group’s work from their website, it isn’t “Latin” inspired at all – the reviewer falsely attributed a different (but also marginalized) culture to the music because they weren’t familiar enough with the black folk genres they were hearing to tell a difference between that and something else. They perpetuated their stereotype of what they thought Latin percussion to be instead of relaying what actually was in the music. The video below shows the group performing some original works and covers, and here you can listen for yourself to hear the inaccuracies in the Manitou article.

While the Judd group is not quite popular enough to merit a space in the St Olaf vinyl collection, they do have records of the Doobie Brothers and Steely Dan – both of which I believe would be excellent additions to our exhibit as we explore the implications of white performers incorporating and appropriating black music genres into their works. 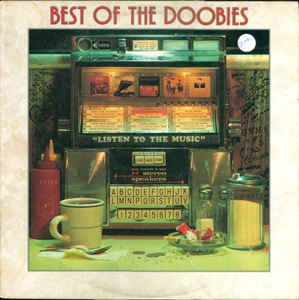 St Olaf owns vinyl of “Best of the Doobies,” which includes “It Keeps You Runnin'” and “Black Water”

While Judd’s work cannot be found at the St Olaf Library, I think that the records St Olaf does have of the Doobie Brothers could be a nice addition to our library exhibit here at St. Olaf. It would display a group that used black folk elements in their rock sound, like in “It Keeps You Runnin” and “Black Water,” where they incorporate blues and soul and say “like to hear some funky Dixieland, pretty mama come and take me by the hand.” Particularly in “Black Water,” the pitch bending, dialect, and instrumentation all point to folk genres in the black tradition. I also think that this would accurately represent what St. Olaf Students at the time were listening to, and it would be nice to do a snapshot portion of the exhibit to look at St Olaf Student’s perception and reception of black folk music and its incorporation into rock.