There are many disparities between the life and legacy of blues musician Robert Johnson. While he was known for playing street corners and juke joints instead of large venues, Yet he is widely (and somewhat mistakenly, according to author Elijah Wald) credited as one of the founding fathers of the genre, even earning the title, “King of the Delta Blues.” If Johnson had so little exposure during his lifetime, why is he the king of this genre? 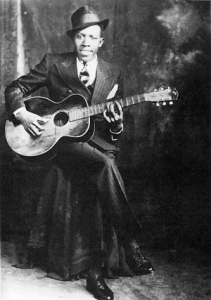 Part of Johnson’s legacy can be accredited to the myth surrounding his success. Nearly every biography tells of a Faustian deal by which he acquired his talent. Johnson’s mentor, Son House, describes Johnson’s music pre-disappearance as a “racket” that drove the audiences “mad.” He disappeared to Arkansas for six to eight months; this is allegedly when he made his pact with the devil at the crossroads of Highway 49 and 61 in Mississippi. House of Johnson’s first concert upon returning: “When he finished, all our mouths were standing open” and, “He sold his soul to the devil to play like that.”

The belief is so intuitive to history’s representation of Robert Johnson that it’s included in his biographies as an almost indisputable fact, as evidenced in a quote from the Rock and Roll Hall of Fame:

“Robert Johnson stands at the crossroads of American music, much as a popular folk legend has it, he once stood at a Mississippi crossroads and sold his soul to the devil in exchange for guitar playing powers.” 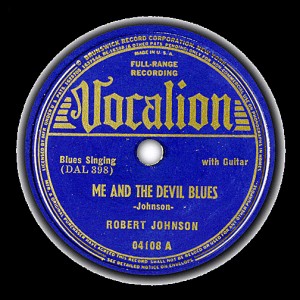 Some of the myth can be attributed to Johnson’s early death at 27 of unknown causes. However, the legend came to prominence after Johnson was rediscovered by white fans two decades after his death. Blues historian Pete Welding, who heard the Faust story from Son House, reported in a 1966 issue of Down Beat that it was taken quite seriously by many fans. Welding states that Johnson’s improvement as a guitarist actually spanned two years, but because of faulty reporting, there’s insufficient evidence to back it up.

Johnson certainly had the guitar “powers” to back up the claims. He’s ranked fifth in Rolling Stone’s 100 Greatest Guitarists of All Time list. Eric Clapton, who recorded a cover album commemorating Johnson’s work, called him “The greatest guitarist who ever lived.”During his time, Johnson was revered for playing in a pan-American style, with songs that resembled Chicago and St. Louis blues more than Delta music. Still, it’s important to remember that while Johnson has widely influenced American (and British) rock n’ roll after the 1950’s, he had virtually no effect on the development of the blues. Elijah Wald writes, “As far as the evolution of black music goes, Robert Johnson was an extremely minor figure…” Johnson’s Faust tale is an example about the mythically proportioned inaccuracies that are often created around the musicians and their histories. In both cases, getting to the root of the story is necessary to learning the truth behind the music.

1 thought on “The Devil and Robert Johnson”