From fields to labels, African-American music is rooted in rhythm. One of the most evident developments of a rhythmic tradition is that of jazz. As broad of a genre as jazz is, I will focus not on the style of music, but rather the rhythmic elements that were carried over from traditional spirituals found in the fields of slaves to jazz groups of the 20th century.

As noted by Crawford, slaves were not given access to instruments in an attempt by the slave owners to prevent rallying calls of rebellion. In response, a tradition developed known as Pattin’ Juba, or a rhythmic hand slapping to accompany songs. Over time and with the abolition of slavery, instruments (among many things) were available to recently freed slaves.

As generations became more removed from the binds of ancestral slavery, the rhythmic style of Pattin’ Juba was transferred to household objects like jugs and washboards. Still in a state of poverty, the freed slaves created their own instruments to supplement the music they had sung in the fields. Below is an image of a collection of homemade instruments. 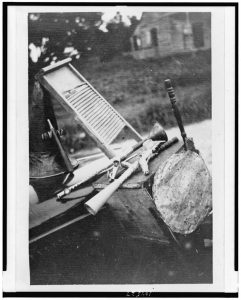 With the same accessibility as one’s own hands and feet had been in slave field, drums and washboards played a prevalent role in early post-slavery music. One group that popularized the washboard was the Washboard Rhythm Kings. Donning thus name from 1931-1934, the group was a small band of predominantly black musicians that performed jazz music. From 1930-1935, the Washboard Rhythm Kings recorded a series of collections of their music. The full album can be found here, and I would like to highlight two tracks in particular that draw strong parallels to the slave music before them. 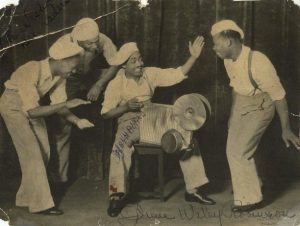 Track #9, “Lonesome Road”, carries many familiar elements of black slave and church music. A speaker engages in dialogue with the other musicians and speaks of “a little revival meeting” and talks of how a singer will “open up this meeting with a little solo”. Following the solo, the speaker speaks to the soloist much like a preacher to a congregation member, saying “Sit down brother. Bless you, bless you.” The song carries on in a freeform fashion.

Track #2, “Washboards Get Together”, is a fantastic example of the rhythmic capabilities of a washboard. Without too much difficulty, the listener can picture a similar rhythm to the washboard rhythm being played out on arms and legs in the Juba dance. As stated previously, the accessibility of instruments like the washboard furthered the intensely rhythmic tradition of the music found in slave fields. Below is a video of the Washboard Rhythm Kings performing an unknown song that highlights the excitement in their playing.

African-American slave and church music exists as an important facet to early American music. Starting in the fields and moving eventually into the popular vernacular, the music continues to play a pivotal role in shaping American music. The rhythmic figures remain a cornerstone in modern jazz, and can be seen in performances by mid-20th century groups like the Washboard Rhythm Kings. Accessible instruments enabled further complications of rhythm, and opened up new opportunities for the rise of jazz.