While browsing St. Olaf’s Flaten Art Museum collection, I stumbled across the painting shown below, and for some reason it just caught my eye.  Perhaps it was the very textured brush strokes, revealing the painter’s very deliberate actions.  Maybe it was the mysterious nature of the coloring and contrast, with the shadows distorting the facial features and making it hard to get a clear grasp about what what is going on in the portrait.  The title of the painting, “Head of Boxer,” gave me some clues as I started to research this painter in the hopes of uncovering the identity of whomever was being painted. 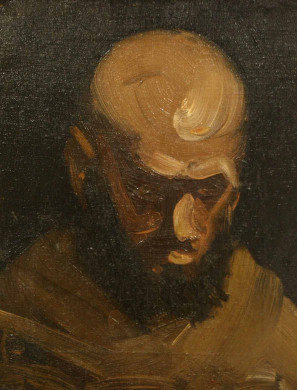 It turns out that the artist, George Wesley Bellows, was part of something called the Ashcan School of Art, a group of artists painting through realism who focused on American society in all its forms.  In an online article The Art of Boxing: George Bellows, the author points out Bellows’ interest in painting boxing matches, specifically amateur boxing matches.  Drawn by the intensity of the sport itself, and its rising popularity in New York, it made sense that a painter in the school of realism would be capturing these sort of events.

I couldn’t find the actual name of the boxer in this portrait, as many amateur fights were happening, and the man most likely never became famous, but searching for answers brought me through the history of boxing and provided some insight on perhaps why Bellows was capturing these fights, and what it had to do with presenting America through the light of realism.

During class last week, we focused on musical theater in the United States and its “American-ness.”  I thought it would be a fun adventure to dig through some of our musical theater history at St. Olaf.  Below is an article from April of 1980 in the St. Olaf school newspaper Manitou Messenger. 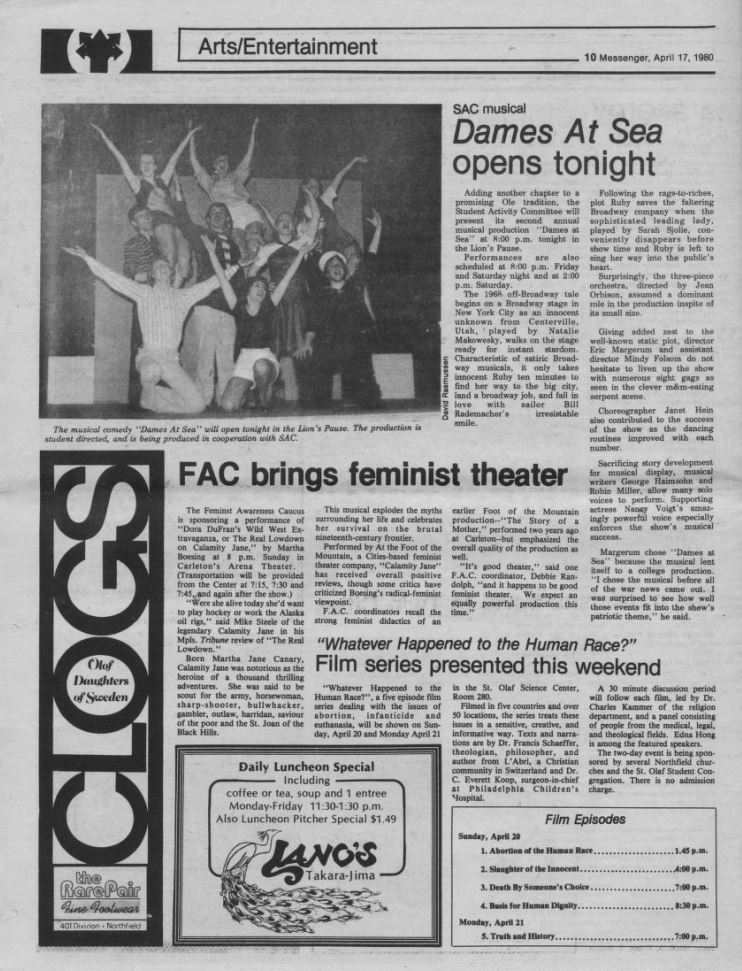 It caught my eye when I read the title of the musical and it was Dames at Sea.  It is, indeed, a rags-to-riches story about a variety of women actresses, or the “dames” in the musical.  The director of the show, mentioned here as Margerum, refers to its patriotism as a story resembles the idea of the American dream.  Margerum also points out the coincidence of picking this play before “all of the war news came out,” and I’m assuming he’s speaking about the Cold War.

However, what I found to be the most exciting about this news page was the role of women in theater, and how both articles offered different viewpoints on the subject.  Although the Dames at Sea story has very stereotypical love triangle (or hexagon) theme, the women are the centerpiece of the story, and provide the vessel through which the American dream is fulfilled.  The article directly below this, however, offers a different view on feminism, sponsoring a theater production revolving around a woman and her “survival of the brutal sixteenth-century frontier.”

I guess I just find some pride that even in 1980 the St. Olaf community was fighting for feminism.  Some people think of the Women’s Rights movement as something that happened in the late 1800’s with women’s suffrage, and then is continued today in modern feminism.  However, just 4 years before this article in The Manitou Messenger was published, it was still legal for a husband to rape his wife.  In 1978, just two years before this article, the Pregnancy Discrimination Act was passed, forbidding employers to discriminate hiring, firing, or forced leave based on women’s pregnancy.  Those laws were found on a women’s rights timeline site found here and the rest of the timeline can be viewed if you like.  There are many more in different encyclopedias and on the web, too! With that being said, it looks like St. Olaf was just following in the footsteps of years before, continuing to keep feminism in discussion among the St. Olaf community, and I’m glad this tradition has continued.