I first heard about Frankie Manning through my participation in St. Olaf Swing Club, where we learn to dance a style of swing called Lindy Hop. I watched a few videos of Manning dancing, and even learned to dance one of his signature moves, the “Frankie sixes”. However, besides Frankie Manning’s name, I never felt like I knew much about the origins of Lindy Hop. Now, as a student officer of the St. Olaf Swing Club, I feel both an obligation and a curiosity to learn more. 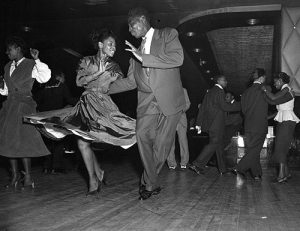 Knowing also that Lindy Hop was created by Black dancers in America, I found that the African American Newspapers database was the perfect place to start piecing together Lindy Hop’s origin story. A column from a newspaper published in Topeka, Kansas in 1931 advertised for a spring N.A.A.C.P. dance happening at the Savoy Ballroom, which would feature a “National Lindy Hopper’s Contest” at midnight. The Savoy Ballroom, located in Harlem in New York, ended up being mentioned in almost every source I found relating to Lindy Hop and the early Lindy Hop dancers.

The Savoy Ballroom can be spotted on the left edge of this 1933 map of nightclubs in Harlem (from the Library of Congress).

A different segment in the exact same publication states outright that Lindy Hop originated in the Savoy Ballroom, as opposed to Broadway revues where the dance style had been made available to wider audiences in the U.S. 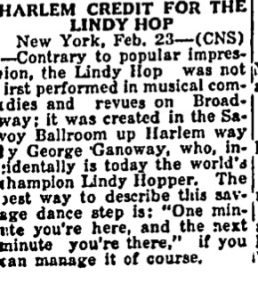 “Harlem Credit for the Lindy Hop” (from Plaindealer)

At the 1939 World’s Fair in New York, a $100,000 theater was built to showcase the dance styles that had developed in the Savoy Ballroom. Fairgoers could pay 25 cents admission to enter the theater, where they could view 20-minute dance performances by “the country’s greatest rhythm dancers”.

While I could not find a list of the aforementioned rhythm dancers who performed at the 1939 World’s Fair, multiple primary and secondary sources gave me the names of some of the pioneers of Lindy Hop. Along with Frankie Manning, “Shorty George” Snowden (who was genuinely a really short guy), “Twistmouth George” Ganaway, Herbert “Whitey” White, and Norma Miller (“the Queen of Swing”) were likely to be mentioned in accounts of the history of Lindy Hop. “Shorty George” actually coined the term “Lindy Hop” in 1937 as a reference to Charles Lindbergh’s solo flight across the Atlantic Ocean. The Frankie Manning Foundation website is an excellent source of short biographies of Lindy Hop’s founding dancers, including historical photographs.

The amount of primary and secondary source material available on this topic thrills me, especially compared with the lack of sources on other topics of interest to me. I can and probably will dig into the history of Lindy Hop and the Savoy Ballroom for hours on end, but for now I can only share a glimpse into where my curiosity will take me: was Ben Homer’s 1939 song, “Shoot the Sherbert to Me Herbert” referencing Herbert “Whitey” White? The song has the ideal tempo and rhythm for lindy hopping, and was written during or right after when “Whitey’s Lindy Hoppers” were performing at the Savoy Ballroom. Coincidence? Maybe, maybe not.