The focus on slave songs this past week provided important insights into the lives of slaves in the late eighteenth and early nineteenth century. In Eileen Southern’s book The Music of Black Americans, she details the ways in which the growing slave population in the South experienced music in their everyday lives.[1] It’s fascinating to learn not only about the songs’ significance, but also how this music has been recorded and preserved over time.

Southern briefly touched on the role of song in dance in recreation. This piqued my interest in one element of slave culture touched upon less in the readings for the week: slave family life. Those with only minimal knowledge of slavery in the United States understand that stable and cohesive families were rare. It was not uncommon for children and their mothers to be separated from their fathers.[2] Nevertheless, recreation and resilient familial relationships were an enduring silver lining. 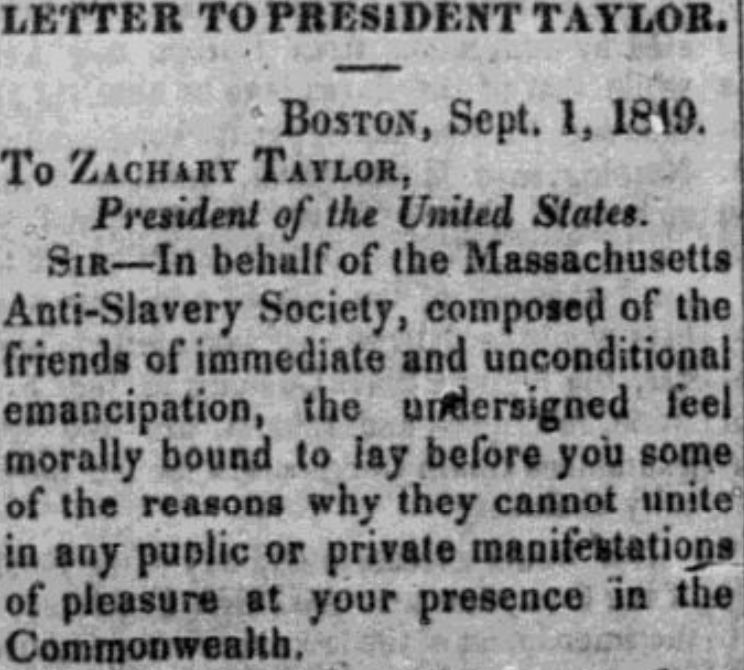 While perusing the African American Historical Newspaper Collection, I came across one especially intriguing article that reflected this theme and, in particular, the mother-child relationship in slavery.[3] The excerpt displays a letter from Francis Jackson to President Zachary Taylor, calling for him to abolish slavery. In the letter, Jackson appeals to President Taylor by referencing the bond between slave mothers and their children. 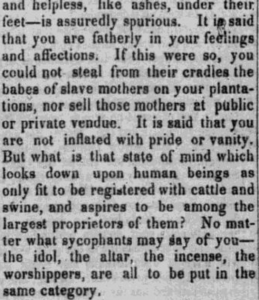 He questions the President’s morals if he continues to permit slavery after acknowledging its cruelty, as evidenced in part by the separation of mothers and their children. This led me to wonder: in what ways did the mother-child relationship in slavery intersect with the music created and preserved on the plantation? Did parents, and more specifically – mothers – have a distinct way of connecting through music?

My research led me to an online feminism project from Brandeis University, which features a collection of information about slave lullabies.[4] Lullabies are typically thought of as soothing melodies sung to calm children. The authors here describe the ways in which slave mothers cared for and nurtured their children through lullabies, despite the lack of agency associated with their motherhood. One excerpt reads:

“Slave songs about mothering open a window into these women’s hearts. Many of these lullabies have come down to us as words only—their tunes are lost—but they resonate nevertheless. Their lyrics reveal an ever-present sense of danger and pain; they whisper sweet promises of a brighter future; and, as lullabies have always done, they serve the practical purpose of making children ‘sleep good, feel better and have something to hope for.'”

This project website includes several original texts written by slave mothers, many of which have been adapted and are recognizable today. Included below is believed to be one of these adaptation: a recording of a song from the 2000 film O Brother Where Art Thou. These lyrics are similar to a poem entitled “Go to Sleepy,” written by Annie Little, who, reportedly, sang her 10 enslaved children to sleep with these lyrics.

Understanding the origins of songs and lullabies we know today, such as those derived from texts documented in this project, can go a long way in preserving slave songs. Lullabies were one way slave mothers could use music to provide comfort, and reflecting on this history allows us to appreciate how music played a part in the complexities of the slave familial relationships.