“Would you Paint All the Colored People White?”

The titular question of what the sheet music claims is “Walter Dauphin’s Great Ethiopian Song” sounds simultaneously hopeful and skeptical. One on hand it seems to be pleading to God on high to make the ‘Colored People’ white, easing their lives of trial and hierarchical suffering. On the other, it seems to be asking, “if you could, would you?” 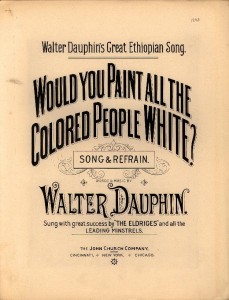 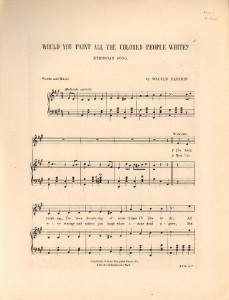 A closer look at the text of the song affirms that the desired emotion of the song is hope, as the idea of painting them is a scheme for the speaker to do the things he’s been “dreaming” about. Presumably, becoming white would allow this individual greater freedoms previously unable to them. This seems like a truthful sentiment coming from a black person in 1893, but of course thats not really the case. The title page also says “Sung with Great Success by ‘The Eldridges’ and all the Leading Minstrels”, confirming that this was definitely a piece associated with blackface performances, though this doesn’t change the fact that this music is surprisingly and spiritually tender.

On the other end of the spectrum is “When the Black Folks Turn White”, a jaunty tune by Ragtime composer Joe Haydn (Not Franz Joseph). This 1898 composition has an extremely different tone from the Dauphin, with a text stating that God’s creation of African Americans was an accident. The ‘joy’ of the piece then, emerges from humorous impossibility of Blacks ever achieving a better life status. 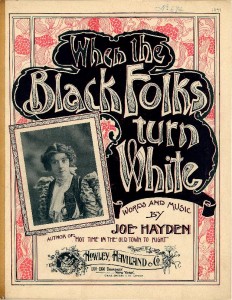 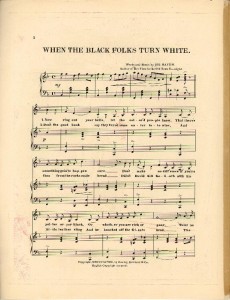 While their is a hope for salvation with the coming of the millennium, it doesn’t make sense for this idea to be taken seriously with the light nature of the sheet music, especially compared the religiosity latent in Dauphin’s composition. Instead, the significance of both these pieces is that they deal with the idea not of blackface, but of whitewashing. What does this say about blackface performers that they would be willing to adopt blackface in order to sing about wishing they were white? Is it possible they were actually grateful for the life they were given based on their skin color? Or were they just rubbing it in?