Throughout this course we have looked at American history through the lens of music, but there is non-musical art that tells a uniquely American story.  While perusing a collection of art owned by St. Olaf this work of pottery, sculpted by Steven Lucas, jumped out as an i 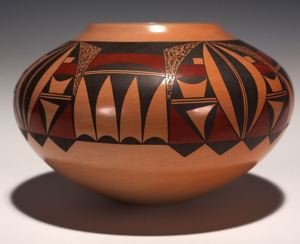 interesting challenge. Continuing the the trend of asking questions, what do these patterns mean?  From what culture do they come from?  How does it connect to American music?

In doing a little research, these patterns belong to the Native American tribe known as the Hopi. The Hopi people reside in northeastern Arizona where their ancestors thrived on a life sustained by corn, spiritual connections, and art. The artist, Steven Lucas, is a descendent of Nampeyo, the great female potter of the Hopi tribe, and is known as one of the great potters of the modern era.

So what can we pull from this pot?  The colors follow a strict family of earthen tones to represent the deep connection that the Hopi people have with the land. There are also a series of patterns that are common in Hopi pottery.  The first is located in the center of the image and it is known at the migration pattern. Represented by the repeating feathers, the migration pattern is for the flexibility of the Hopi people to move when demanded by the land. The second pattern present on this particular pot (on the left) is the Butterfly Maiden, which represents fertility.

So how does all of this come back to relate to American music history?  Native American elements have been implemented into music for centuries and these influences varied in historical accuracy.  More often then not, musical style characteristics identified as sounding Native American are primitive and quite degrading.  If we take the initiative to extend our view point to ethnomusicological evidence, we see a different story. Art, in all senses, is tied together through the people’s deep connection to the earth.  The same concepts that are seen in the visual art of pottery are experienced in dance as dancers focus their motions into the ground and in the incorporation of natural elements into ceremonial dress.  Music also has a deep connection to the earth.  Musical instruments are constructed from the land and the subject matter of many Native American songs directly involve nature or the higher powers that govern and control the earth.

I believe the take away message of this piece in particular is its connectiveness to the people and how regardless of form, art serves as an expression of culture for a group of people.

Art. I am talking about the physical art: paintings, sculptures, portraits and ceramics. These types of artworks are what make museums or art collections unique. When I look at such artwork, I spend so much time trying to interpret what the artists create. There may be little information displayed about the specific piece or the artist, but honestly how many people actually read it. What I enjoy most about looking at artwork is when I am able to get lost in my own thoughts to help me make sense of the artwork that is right in front of me.

Last week, while visiting St. Olaf’s Flaten Art Museum. There was a lot of interesting artwork displayed. There was one piece of artwork that stood out. 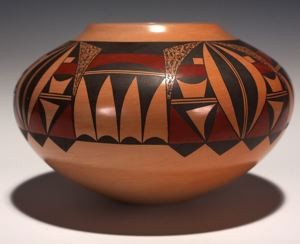