I was surprised when I first started reading about the friendship between Henry Cowell and Percy Grainger. My understanding of Cowell was that he was an abrasive, noisy ultra-modernist, while Grainger was a pleasant, folksongy writer of band music. It seemed like these men had nothing in common. I was surprised to learn that they had a remarkable amount in common. To begin with, both had a reputation for their treatment of the piano. Cowell’s for his use of extended technique, and Grainger for his wild virtuosity. Both were considered geniuses, each with a deep interest in researching and analyzing music of other cultures. Both men often taught classes or guest lectured, which is how they ended up meeting each other. 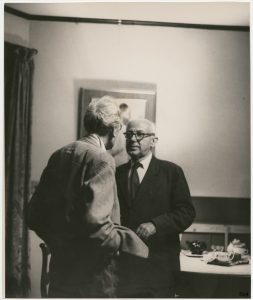 Grainger and Cowell in 1951

The two first met on January 17th of 1933, when Cowell was giving a lecture at NYU. Grainger was so impressed, he attended another lecture of his two weeks later. The two talked and agreed to meet to show each other their compositions and field recordings of folk music. After a successful ‘show and tell’ of sorts, they decided to remain in touch, marking the beginning of their correspondence. After their first meeting, Cowell wrote to Grainger

“I am still in a rare state of excitement and delight at having contact with you today, and finding that you are so enthusiastic over the same things that I am!”

Grainger responded to this by writing

“The more I think about it the more I am amazed by the beauty , purity & charm of your epochmaking experi- ments as a composer, & the sanity & balance of yr attitude as a student of worldwide music”

The men continued writing letters for a year or so, and gave guest lectures at each other’s classes. The two temporarily lost communication in 1934 when Grainger moved to Australia for some time. From 1934 to 1937, there was no correspondence between the two. When Grainger mailed Cowell’s journal to receive Cowell’s mailing address, he was shocked to learn that Cowell had been sent to prison. In 1936, Cowell was sent to San Quentin Prison for having sex with an underage male. This did not stop the friendship between the two. Between 1937 and Cowell’s release in 1940, they exchanged over 100 letters with one another. Eventually, Grainger wrote to Cowell saying that once he got out of prison, he wanted Cowell to become his personal secretary, and the two men could research music together. Cowell joyfully accepted, writing

“What a wonderful opportunity you and your wife offer me! I have no words to express myself with…To go to the islands to ‘get away from it all’ is one thing; but I should like to go there to get into it all”

Thanks to Grainger’s pressure on the Prison board, and for sponsoring Cowell’s parole, Cowell was released from prison in 1940 and moved to Grainger’s house in the Cook Islands. Once there, it was Cowell’s job to preserve Grainger’s archive of wax cylinders, scores, letters, manuscripts, pictures, drawings, and writings. 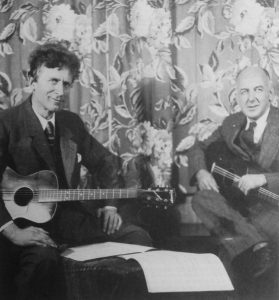 Grainger and Cowell having a jam session

During this time, Cowell was also experimenting with composition, and played with Grainger’s massive collection of exotic folk instruments. Because of financial strains, Cowell’s employment was mutually terminated in 1941. The two remained friends, occasionally exchanging letters until Grainger’s death in 1961.

Anyone who has taken Music History alongside the Norton Anthology knows Henry Cowell as the composer of the epically stated The Banshee. However, The Banshee is not the only Irish mythological topic that inspired his music as noted by Dr. Charles Pease, writer of the “As I See It” column in the Evening News, published in San Jose, California in 1922.[1] This column does not specify which piece he heard, so I did some extra research to find out which piece is most likely.

The volume of The Evening News was published three years before Cowell’s The Banshee was premiered.  I found another piece written in 1912, entitled The Tides of Manaunaum: No. 1 of “Three Irish Legends.” This piece accurately fulfills all the descriptions found in Dr. Charles Pease’s article; it is based on Irish myths, voices “the crashing movements of the incredible forces and masses conveyed in strange ‘chord-clusters’, and includes “the old Dorian modes developed perhaps five or six centuries before Christ.” However, just because this piece includes chord clusters and the Dorian mode, does this piece really show a “World Closer to God?”[2]

The edition published in American Piano Classics selected by Joseph Smith includes the story according to John Varian:

Manaunaum was the god of motion, and long before the creation he sent forth tremendous tides, which swept to and fro through the universe, and rhythmically moved the particles and materials of which the gods were later to make the suns and the worlds.[3]

Yes, the low clusters the show the crashing tides against the shore created by the “god of motion” and the Dorian mode points back ancient Greece. But does this music really transcend over all other music the godly cosmos of another world? The ideas of chord clusters had been around as Igor Stravinsky used dissonant clusters in his music, and composers had been looking back to the Greeks for some time. Henry Cowell is just another development in the scope of music.