Folk music is one that draws many questions from American music historians. Questions like, “who owns folk music?”, “where did these tunes originate?”, and “what is a folk song?”.  One perspective that is particularly interesting and comes to a strong conclusion is that the origin of American folk music is based upon African Tradition. An article in The Chicago Defender claims that from African Americans and slave music, the genre of folk emerged. The argument is that the melodies of African American music prior to the Civil war were considered true American folk songs. Some original, but also based on African traditional music. The English, French, and Spanish all brought their own style of song to the United States, so their music isn’t naturally American. Oscar Saffold wrote in his article, “There is, however, a real indisputable folk song in America, an American production, born in the hearts of slaves — expressing a part of the life of our country.” This can be argued against, saying that the music of the slaves is originally from Africa, but Saffold’s argument is moreover strong, in that the African American traditional music had a large influence on proceeding music styles such as the blues and then jazz.

During the time of the Civil Rights’ Movement, there were many protests in southern United States, to express the desires and rights of equality among people; To blur the racial lines. These protests were filled with demonstrations that used art to promote equality, and the folk song emerged as an effective protest song. This incorporated the melodies of the old slave songs, but with new words. For example: 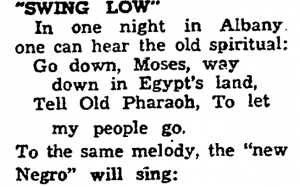 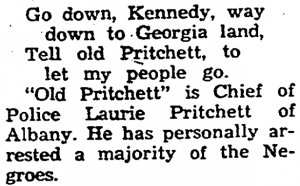 This type of folk song is called a freedom song. It was used as a way to unite a community of people during the Civil Rights’ Movement, and was thought to communicate and express sentiments when words weren’t enough. This is tied into the work songs of slaves during the Antebellum South.

A poignant quote from the article says, “while there is no American folk song in the sense of expressing American life as a whole, still there is a folk song in America, and that is the music of the Negro” (Saffold). The roots of American folk music go deep into the history of the African American slaves of Southern American, and since, folk music has taken on many other attributes with the Folk Revival of the late 20th Century.