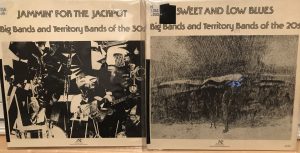 Vinyls: “Big Bands and Territory Bands of the 20s and 30s”

As I sifted through the LPs in the Music Library’s vinyl collection, I was particularly drawn to a section on big bands. The two LPs that piqued my interest the most did not catch my eye because of their cover art, but rather their titles; “SWEET AND LOW BLUES: Big Bands and Territory Bands of the 20s,” and “JAMMIN’ FOR THE JACKPOT: Big Bands and Territory Bands of the 30s.” My first thoughts upon seeing these records were: 1. I know a little about big bands, right? and 2. What is a territory band?

“Jammin’ for the Jackpot”

These two vinyls are collections of popular territory band recordings from the 20s and 30, and inside each of them are extensive and informative essays on the history of territory/big bands. Today we are more familiar with the term big bands, but at the time these ensembles were called territory bands. Territory bands were regional dance bands in the Midwest, south, and southwestern states. Their principal function was to provide music for ballroom dancing, which was becoming increasingly popular in the 20s and 30s. From roughly the end of World War I until the Great Depression, dance orchestras in the United States grew in number, size, and popularity in response to this call for dance music. However, in the forward to “JAMMIN’ FOR THE JACKPOT: Big Bands and Territory Bands of the 30s,”J.R. Taylor writes that, during this period,

“Jazz musicians were in frequent creative tension with the dance band industry – exploiting and expanding its musical resources, learning its professional lessons, earning its wages, and chafing under its difficult working conditions and many artistic restrictions.”

This complicated relationship existed vice versa as well, because jazz soloists served as a creative source for dance band – the innovative phrasing, rhythms, and “the adaptations and assimilations from classical music,” (Taylor). However, it is important to note that not all territory bands or big bands were strongly jazz oriented – a detail that gets overlooked now as we tend to blend the genres of jazz, big band, and swing (I myself am guilty of making that generalization without thinking.)

Here is a digitized recording of “Madhouse” performed by Earl Hines and His Orchestra —  one of the tracks found on “JAMMIN’ FOR THE JACKPOT: Big Bands and Territory Bands of the 30s,” so you can hear the style of music I am referencing. 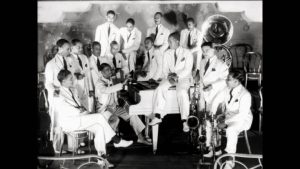 Earl Hines and His Orchestra

By the time the Great Depression hit in the 30s the territory bands were failing to survive, as live music was replaced with the radio, and having a disposable income was no longer an option. While all of this was going on, back at St. Olaf a mysterious “L” was expressing their own opinion on jazz music and dancing in the Manitou Messenger. “L” calls the jazz band “contemptible,” “obnoxious,” and “profanity in music.” The author argues that the jazz band and jazz music do not correspond with the (Christian) spirit of St. Olaf College, and should thus be driven off the hill.

“L” does, however, recognize that jazz music naturally calls us to dance. They even pose the question “Why allow temptations such as this to exist?” if we know it’ll just make us want to get up and start dancing. Remember, dancing was forbidden at St. Olaf during this time. When you search the Manitou Messenger archives for “dancing” during this period it is consistently referred to as “folk-dancing” or “traditional-dancing” or “Norwegian-dancing” – safe forms of dancing that correspond with the mission of the college.

So, there’s quite a contrast between the popularity of ballroom dancing accompanied by touring territory bands in the 20s and 30s, and the nasty portrayal of jazz music and dancing by a student from St. Olaf. All I can do is wonder what “L” would think about our jazz bands and swing club.

Another example of taboo dancing in the Manitou Messenger. Taken from “Growing Pains,” published in 1935.