After reading Carol Oja’s article “West Side Story and The Music Man: Whiteness, Immigration, and Race in the U.S. During the Late 1950s” for class, I found myself wondering what other musicals premiered on Broadway during the 1957-1958 season.1
A quick google search revealed that, along with West Side Story and The Music Man, three other shows were nominated for the Tony Award for Best Musical in 1958: New Girl in Town, and Oh, Captain, as well as one name that stuck out to me: Jamaica. Knowing nothing about Jamaica, I was immediately intrigued by the idea that another musical dealing with American-Caribbean relations was on Broadway at the same time as West Side Story. 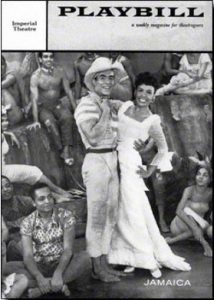 Cover of the opening night program for Jamaica, which opened at the Majestic Theater on October 31st, 1957.

Using a modified Calypso musical style that was popular in New York, Jamaica (book by E.Y. Harburg and Fred Saidy, music by Harold Arlen, and lyrics by E.Y. Harburg) tells the story of a Caribbean island community and its experience with tourism and other current events of the late 1950s. The musical was not a critical success, but became “the longest running black-cast Broadway musical up to that time.”2
Theater scholar Shane Vogel remarked that “Jamaica parodied the colonial system, Caribbean tourist economies, and the ideological struggles that subtended a cold war that was never very cold. It may be the only Broadway musical to stage, just before intermission, a mushroom cloud.”3 Through a variety of artistic changes made just before opening (including replacing the original Jamaican star Harry Belafonte with Lena Horne) the political critique of the show was somewhat watered down. (It is also interesting to note that Alvin Ailey appeared in the ensemble.)

West Side Story and Jamaica uses similar themes of connection between Caribbean islands and the United States, but in dramatically different ways. While West Side Story focused on the trials of racial and cultural integration of white and Puerto Rican American youth in New York City, Jamaica emphasized the detrimental effects of colonialism on the inhabitants of the fictional Pigeon Island, at least at first. By the time it got to Broadway, 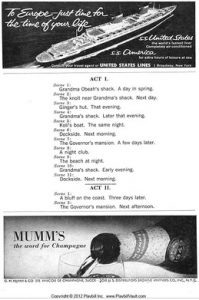 and despite the intentions of the writers, “the show appeared as a typical instance of mid-century Broadway Caribbeana: a tourist production that traded on notions of an undifferentiated Caribbean landscape and a tropical aesthetic of “calypso” rhythms, moonlight romance, and folk simplicity” “where blackness was staged as a site and possibility for diasporic political consciousness,” according to Vogel.4 Reflecting this change, advertisements that appeared in the opening night playbill were for cruise ships, clothes, and alcohol.5
While the songs still contained critiques of American intervention (for example “Yankee Dollar,” and “Leave the Atom Alone”), the Playbill synopsis now reads “A Jamaican woman dreams of moving to New York City, despite her boyfriend’s contentment with the island life.”6
Despite giving a platform to black artists, many of whom became involved with the Civil Rights Movement, Jamaica was a far cry from giving a unique political voice to black island communities. For further reflection on the evolution of musicals with Caribbean themes, it would be interesting to compare Jamaica to the current Broadway musicals that take place on Caribbean islands, such as Once On This Island, and Escape to Margaritaville.