Francis (Frank) Johnson (1792–1844)— an “originator of music for the new (American) Republic”—was an African American bandleader, composer, teacher and performer from Philadelphia, Pennsylvania who was central to the cultural and musical life of his locale.[1] Johnson was born within the post-Revolutionary context of a burgeoning community of African Americans in Philadelphia, known as Society Hill.[2] Frank Johnson’s skillset was broad, and besides developing virtuosity on the violin and cornet, he achieved great admiration by Philadelphian elite, whom he composed dances for and performed them with string and brass bands at balls and parties.[3] Johnson lived at 536 Pine Street in Philadelphia for most of his life, a site which today has a commemorative marker honoring the legacy of the trailblazing musician.[4] See below. (Photo; cite it) 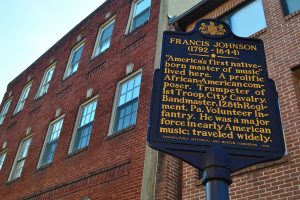 Johnson also composed music for regional militia gatherings, cultivating his capabilities in the wake of a “rush of patriotism” sweeping America after the War of 1812.[5] His brass band played marches and quicksteps (the latter is a type of march)—considered “today as the earliest form of distinctly pure American marches,” Johnson set a standard of influence for American martial music in the early 19th century.[6] He would go on to compose over 200 pieces in a variety of genres.[7] By 1837, Johnson became a pioneering American musical figure in another way—his brass band prepared and embarked on a tour to Europe, performing in London, which was significantly “the first known performance by an American music ensemble in Europe.”[8]

Frank Johnson toured in the United States, which expanded his reputation beyond Philadelphia. Notably, though, such regional tours to the Midwest and other Northeast cities were not always received well. Occupying an era predating blackface minstrelsy, Johnson nevertheless lived at a time when societal racism presented momentous challenges to even free Black communities in the North.[9] After one performance in Allegheny City, Pennsylvania, in 1843 (near Pittsburgh), newspapers reported of a “Riot near Pittsburgh- Frank Johnson’s Band robbed.”[10] Frank Johnson passed away in 1844. Though hindered by racism as an African American and largely overlooked today in American music history, Frank Johnson was an important musical figure of the Antebellum Era who can be understood as an originator of distinct American musical forms and American performance abroad. 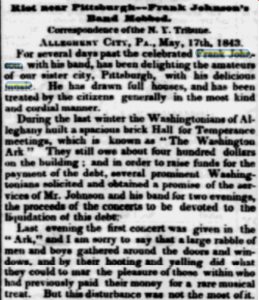 Charles Ives, the early twentieth century,American composer pictured pensively above, is situated at an interesting boundary between historical debates of what constitutes “American music” that we’ve discussed in class. While Virgil Tomson’s ideas defined authentic American music as being “derived from the British Isles”—assuming that the English language predominating in North America explained a continued lineage of English culture and music over all else—other critics and musicologists have promoted an idea that pulling from diverse folk traditions is the essence of American music.[1] Charles Ives, descended from pilgrims and growing up with Anglo melodies in New England before becoming more avant-garde and drawing from folk traditions as some consider part of an “American school” of composition, demonstrates the futility of trying to narrowly define “American music.”[2] Ives’s existence problematizes the work of early twentieth century music critics like Tomson and Olin Downes, who—possessing prominent influence over public perception of American classical music—used Ives to promote contradictory, limited arguments over American musical authenticity.

The debate over American Music’s standards and authenticity, especially in considering the influences of white male composers like Ives, was a means of determining what whiteness was in an early twentieth-century cultural context. Tomson saw an evolving American idiom, though in some ways diverging from European music, nevertheless marked by similarities indicating “the products of a common tradition.”[3] Tomson believed Charles Ives’ music fit the characteristics closely linking European and Anglo lineage to American music. However, a 1937 New York Times article by music critic Olin Downes, a contemporary of Ives, glances at “native scores” and lauds the many folk music traditions informing the development of modern American composers.[4] Downes believed that not all American symphonic repertoire had been “mere imitators of European models of composition.”[5] Instead of pointing out examples of American music deriving new forms only from the foundation of European music (as Tomson did), Downes emphasized the wealth of folk music that American composers could draw from, “either grown from the soil or transplanted there from outside sources.”[6] Still, he links and celebrates the connection of this distinctly American folk music to songs like “Dixie” which immortalized the ideals of slavery and the Old South. This fact demonstrates a racialized context which—well into the twentieth century—still possessed mainstream influence in legitimizing problematic forms of white culture nationally. Nonetheless, as Tomson, who drew from racist, controversial scholarly ideas like those of George Pullen Jackson, saw American history as too short to legitimize its composers, Downes declared that the young (white) composers of the era, including Aaron Copland, Virgil Thomson, and Charles Ives, were too little performed.[7]

In conclusion, debates over what Ives represented showed incongruent definitions of musical authenticity, since one composer fit into both “camps.” It’s perhaps more important to consider how analyzing debates over American music through the lens of Ives and critics like Tomson and Downes problematizes their arguments. While they musically diverge, the convergence around attempts to define the raw materials worth lauding in American music as a reflection of whiteness and thus white American culture provides a glimpse into the mainstream, overtly racialized ways by which music critics influenced society and worked to further an exclusive conception of American music.

As a class, we recently learned about Frances Densmore’s ethnographic research on Native Americans, in which she recorded and documented myriad songs and information about the culture of multiple Native American tribes in Minnesota and the US.  Densmore approached her research on these groups as a scientific endeavor—viewing Native Americans through a nineteenth-century racialized lens that perceived them as tantamount to the natural landscape and representative of a primitive European past. However, she was not the first, nor the only ethnologist learning about and extracting the sonic resources of Great Plains tribes at that time. Consider Alice C. Fletcher, who “began collecting ethnological and musical data in 1883 among the Omaha and Dakota Indians.”[1]As both Fletcher and Densmore’s work perpetuated cultural imperialism, understanding how it contributed to the development of ethnomusicology at the expense of native cultures perhaps leads to a better understanding of the discipline’s tainted, yet prolific, roots.[2]

An 1893 news clipping from the scrapbook of Ely Samuel Parker describes Alice C. Fletcher as  “A Woman Who Worthily Stands for Her Sex,” referring to her work as President of the Anthropological Society.[3]  Having studied “Indians in our Western Territories,” the writer declares that “there is no one in this or any other country whose knowledge on the subject approaches hers.”[4] For her research, Fletcher “…spent years among the Indians, living in their camps unprotected, learning their language, studying their customs, music…”[5] The writer states that at the time of this publication, she was in the midst of “revising…an important work on the music of the Omaha Indians…”[6] Two decades later into her career, she published a 600+ page work on the history of the Omaha Tribe that I tracked down in the library.[7] Like Frances Densmore in numerous works like Chippewa Customs, she notates indigenous songs using western notation (reinforcing its colonial hierarchy), and uses a social scientific lens to try and explain their culture. Yet in the 1893 clipping, the writer assures us that her “work among the Indians has a benevolent as well as scientific side”[8]

The article goes on to describe her friendship developed with the tribe, and how she leverages this to “secure for the Peabody museum trophies and relics from the different tribes which had never ever been seen by a white man.”[9] Ultimately, this transactional relationship unfortunately outlines how researchers of her era thought it ok to exploit the trust of tribes. Native Americans fit a Western narrative believing that “these supposedly primitive musical cultures were part of a dying world that was succumbing to American civilization and that scholars needed to preserve what they could before their assumed extinction.”[10] Fletcher’s work was profound—she published the first ethnographic presentation of a Native American tribe’s music in 1893 (the aforementioned work on the Omaha) and she wrote more than 97 entries for the Bureau of American Ethnology’s Handbook of American Indians North of Mexico in 3 years—however, it was predicated by racist assumptions all too common at the turn of the century.[11] It’s important to conceptualize how Fletcher’s work as among the first to record Native American music provided detailed documentation of their history while perpetuating biased beliefs of a racialized musical hierarchy that others, like Densmore, would build upon.