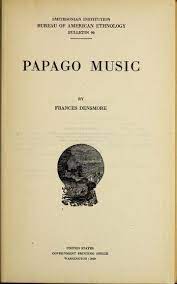 Frances Densmore was an accomplished woman who took on the task, given by the United States government, to record a vast amount of songs from indigenous tribes across the nation. By peering into this task shallowly, one might argue that she made a great and positive feet for the indigenous tribes she encountered. She is inherently responsible for keeping many traditions and songs from these tribes alive through her use of publications, notation, and recording cylinders. However, the method in which she took to force her presence on some of the indigenous people was one that often caused critique from her peers and scholars today. 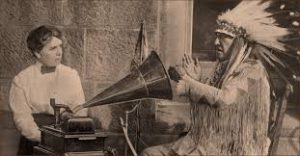 The Papago people are located in the southwest region of the United states, specifically located in the valleys of the Santa Cruz River. Called by Densmore the “desert people”, the Papago lived and recorded with Densmore in the Papago Reservation in Sells, San Xavier, and Vomari in 1920. Through Densmore’s bulletin published on the Papago, we come to learn that they are an agricultural tribe, often dedicating much of their time and resources to farming maize, beans, wheat, barley, and cotton. Interestingly Densmore shares that the Papago are “by nature and industrious people and are now finding employment in various activities incidental to the coming of the white race. For instance, many are able to make a living by cutting mesquite wood in the desert and selling it in the neighboring towns.” I wonder how “natural” this quality was of Papago, or if it was the outcome to her and the government’s push for assimilation into American society.